Solar PV systems are still an excellent investment in Australia, even as feed-in tariffs have fallen across the country. Installing a hot water diverter – a device that automatically sends excess solar energy into your hot water tank – can make this good investment option an even better one. We’ve crunched some numbers to determine how much shorter a solar PV system’s payback period can be if fitted out with a hot water diverter.

Why divert solar into your hot water tank?

These days, electricity retailers don’t pay you much if you send your solar energy into the grid. Instead, most people get value out of their solar PV systems by ‘self consuming’ their solar energy – i.e. using it directly in the home. In most instances, when your solar panels produce energy, it is automatically used first to power the devices in your home, with only the excess, unused energy being sent into the grid. Self-consuming your solar energy directly reduces the amount of money you need to pay to your retailer for energy from the grid (known as ‘offsetting’) by around 25c per kilowatt-hour (kWh, or unit) of energy (the exact rate will vary by region and retailer). On the other hand, exporting a kWh of solar to the grid will earn you only about 6-8c (again, these rates vary).

The take-home point of all this is that the solar energy you produce is worth about 2.5 – 3 times more if you use it directly than if you export it. Clearly, it’s in every solar system owner’s best interest to maximise solar self-consumption.

There are numerous approaches to doing this, but the most important one is to size your system appropriately – a system too large for your home will result a larger-than-necessary proportion of the energy it produces being sent into the grid. Assuming you’ve already chosen your solar system size and know that you will have some solar energy to spare during the day, you might then want to look into putting some of your devices on timers so that they run when the sun is shining. This is a tricky business, however. as timers may not ‘know’ when the sun is shining vs when it’s not. Increasingly, battery storage technology is being eyed as a way to store excess solar energy as it is produced, but few would argue that it is cost-effective (yet).

Instead, installing a hot water diverter may be a more cost-effective (and often more reliable) option than those mentioned above. As we’ve discussed previously, a home’s hot water tank can actually act as a kind of energy storage device, given the right equipment. A diverter essentially converts excess solar energy into stored heat inside your water tank, reducing or eliminating the need to purchase energy from the grid for water heating. Unlike solar hot water systems, installing a solar diverter does not necessitate any plumbing work to be undertaken – and units can even be retrofitted onto an existing solar system without much trouble. In a best-case scenario, a diverter will allow a home to ensure that it’s using 100% or close to 100% of the solar energy it produces. 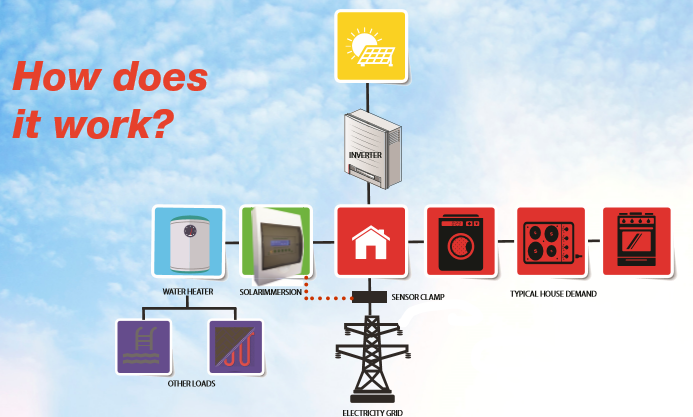 An example of how a solar diverter works: excess solar is sent into your water tank instead of the electrical grid. (Image via Malabou / SolarImmersion).

How much more will you save with a diverter?

Let’s have a quick look at the factors that influence payback times and savings when it comes to solar water diverters.

We’ve put together the table below to shed some light on exactly how much ‘better’ a hot water diverter can make your solar system at saving you money. We’ve taken a middle of the road approach, using average system prices (as opposed to the lowest system prices on the market). We assumed that a diverter will cost $1,000 to have installed and that it will allow the home to use nearly all (90%) of the solar energy it produces, while the home without a diverter will only self-consume 60% of its solar energy. Using our Solar PV Payback & ROI Estimator tool, we ran the numbers on scenarios for two popular system sizes (3kW and 5kW) in four capital cities (Brisbane, Melbourne, Perth and Sydney) using a retail electricity rate of 25c/kWh and a solar export rate of 8c/kWh.

The results (while indicative only) should shed some light on the promise of a hot water diverter. On average, installing a diverter for a cost of $1,000 reduced payback periods by about 8%, and increased first year savings by about 30%. The 5kW systems offered better value for money in all scenarios, thanks both to the fact that they’re cheaper per watt and produce more energy than smaller 3kW systems. It also helps that the cost of the diverter doesn’t (or at least shouldn’t) increase with the cost of the overall system.

Some caveats about these conclusions

We can’t actually determine for sure whether the hot water tank will always have the capacity to store the surplus solar (they have inbuilt temperature limits for safety and performance reasons). This means that it may not actually be possible to increase your solar self-consumption to 90% (although in most cases this won’t be a problem). We also haven’t considered the fact that some homes have their electric hot water running as an off-peak ‘controlled load’ – and are therefore receiving a special, lower rate retail electricity rate in return for being able to only run their hot water at night (this could diminish the economic attractiveness of a diverter). You might also notice that none of this is relevant to you if you have gas water heating in your home. We recommend playing around with our Solar PV Payback & ROI Estimator tool and speaking to an installer who offers a diverter option.

What hot water diverter products are available in Australia?

There are a number of diverter products in Australia, and the list below is by no means comprehensive, be will add to it as more devices come to our attention. (If you see something missing, feel free to email james@solarchoice.net.au.)

Solar Choice can help you compare solar & battery storage offerings in your area of Australia – and some of the installers may have solar diverter options as well. Simply complete the Quote Comparison Request form to the right of this page (click ‘battery’ if you already have a solar system).