Solar Choice is happy to announce that we have at long last published our first Battery Storage Price Index – a generalised view of what it costs to have a battery storage system installed in Australia.

If you’ve done any research into the battery storage market at all, you’ve probably already worked out that batteries are complicated. Especially in light of the current (high) price points, it’s difficult to work out whether batteries are worth it for your home – they’re not yet on par with solar panel systems in terms of their cost and the value that they deliver. (You can see current solar system prices here.)

This means that organising & presenting battery pricing is a bit more complicated than solar system prices, and this complexity is further compounded by the fact that battery systems come in a range of sizes & size increments. That being said, we’ve tried our best to condense all the information into the most palatable (but still meaningful) formats possible.

Important note: None of the prices & costs detailed below include the installation of a solar system. For current solar system prices, please visit Solar Choice’s Current Solar System Prices page. 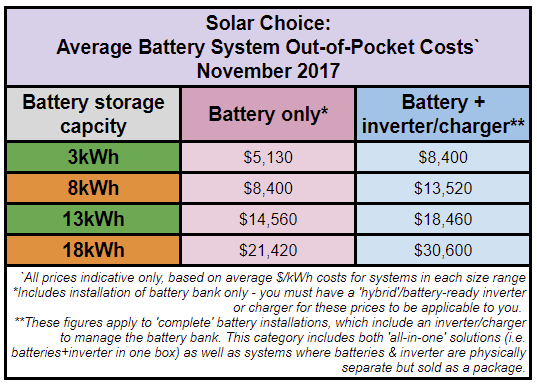 Some further information and explanations about the numbers: 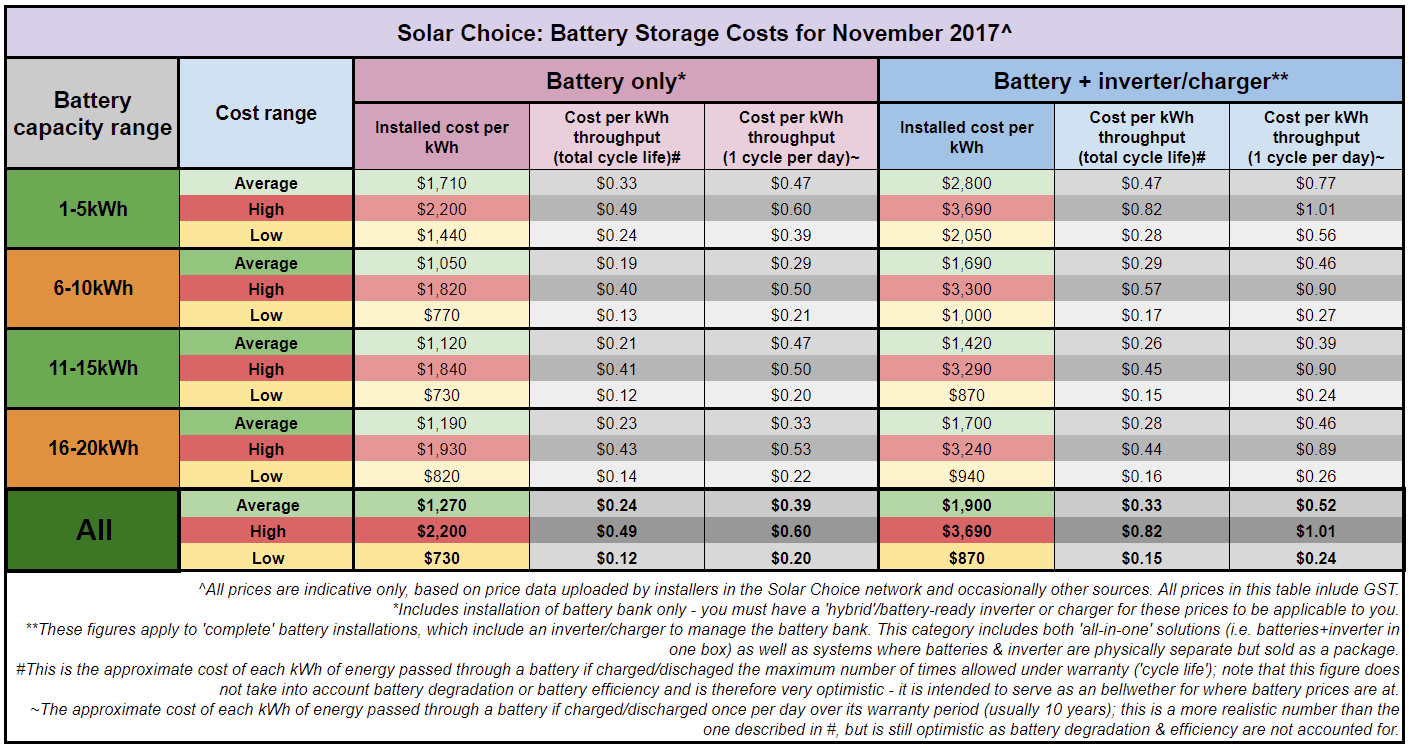 In this table we try to provide a clear idea of battery value. When comparing battery systems, people in the industry typically speak in terms of ‘dollars per kilowatt-hour’ ($/kWh) of storage capacity. This is an easy shortcut for discussing battery value (which is why we’ve included it), but doesn’t tell the full story as different batteries can tolerate different levels of use. For example, some batteries may only be charged/discharged (‘cycled’) once daily, while others can by cycled up to 2.7x per day (see: sonnen) without voiding the warranty.

Introducing the ‘Are we there yet?’ Meter Battery storage is the most talked-about topic in our industry, but when it comes to uptake numbers batteries are not anywhere close to where solar PV systems are. One of the main reasons for this is cost – batteries are much more expensive than solar systems, and the value they deliver in terms of energy bill savings is not as great as solar on its own.

We’ve taken it upon ourselves to set a gauge for the overall state of affairs when it comes to battery storage with the creation of our ‘Are we there yet?’ Meter (the chart below). We look at the national average & low battery prices for a moderately-sized (10kWh) ‘full’ battery system (not a specific product, but more an amalgamation of various products that we’ve seen) and see how the estimated payback periods stack up against a theoretical ‘ideal’ payback period of 7 years; we see this 7 year mark as being a reasonable marker of the battery market being where it needs to be to make sense for most households (the ‘there’ in ‘are we there yet?’).

At just over $1,000/kWh for systems on the ‘low’ end of the price spectrum, and with payback periods coming in at just over 10 years, we’re close enough for lots of Australians to justify making an investment in batteries to themselves (as many already are) but not yet in the territory of ‘mass appeal’.

Remember that this chart is meant to reflect the national situation as an amalgamated whole – your individual circumstances (including the state you live in, the amount you pay for electricity & the deal you get on a battery system) may be conducive to shorter payback systems, so we encourage you to look into it for yourself. 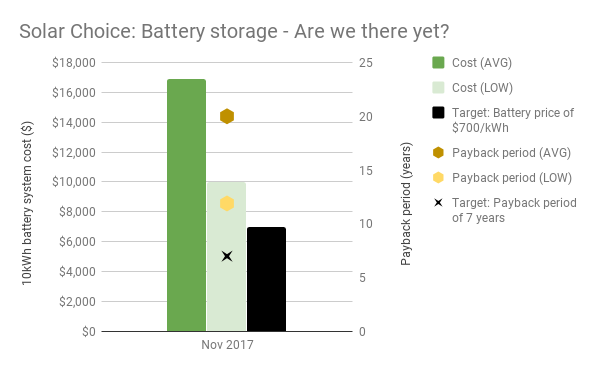 Tables and charts included in this article were compiled using data from Solar Choice’s installer network database (as well as a couple of outside sources), which contains regularly-updated pricing and product details from over 100 solar & battery installation companies across Australia. Prices do not ordinarily incorporate meter installation fees or additional costs for difficult or complicated installations.