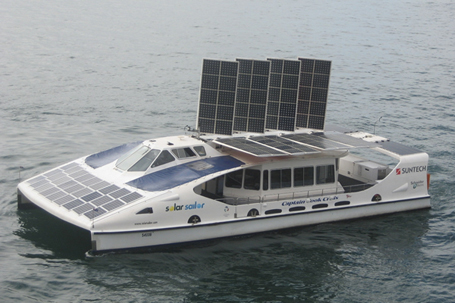 There is a sleek looking vessel in Sydney Harbour that has been creating ripples of intrigue amongst tourists and locals. Noticeably quiet and modestly sized, it has attracted attention from numerous international audiences, and been described as nothing less than the future of marine transport. It is known as the Solar SailorTM, flagship and icon of Solar Sailor Holdings Ltd – see www.solarsailor.com. The ship has won several awards for excellence in innovative maritime and environmental design, and been among the most celebrated topics of modern marine technology for the past decade. This article will take a look at this new naval endeavour; examine just how it works and why it has been so successful.

Coming under the area of research and development known as Hybrid Marine Power, Solar Sailors utilise several sources of energy in conjunction to power the necessary applications and utilities of a marine vessel. The energy that powers a Solar Sailor vessel is taken from a number of sources:

The ingenious aspect of the Solar Sailor is that it utilises two of the most widely available sources of energy known to man, the wind and the sun, to charge and run these facets during both operational and stationary states. This venture has the potential to greatly reduce running costs and increase efficiencies when compared to standard combustion outboard or main sail equipped vessels. In addition, because the energy is being taken from naturally occurring renewable source, the adverse environmental impact of a Solar Sailor is almost nullified by comparison to a typical marine craft.

The technology at the centre of Solar Sailor’s developing projects is known as the Solar Wing. In essence the Solar Wing acts as a solidly constructed retractable sail, covered in PV panels to harness the sun’s rays. The wing is constructed similarly to a retractable fin, and is integrated into the vessels structure from the design outset. The fins are situated on various parts of the ship depending upon concepts of aerodynamics and marine architecture, but all act in a similar manner. They are fitted with Photovoltaic (PV) solar cells that absorb solar energy, much like the ones that are installed on the roof of a residential home or commercial property.

What’s in a wing?

The solar energy that is generated by the wing charges the deep-cycle batteries that are stored on-board. These are used for a variety of purposes on the vessel. For one, the modern electric engines that run off them consist of only one moving part, and are exceptionally reliable.  The batteries can also power all of the electrical utilities such as lights, air conditioners, fridges and guidance systems.

In addition, the fins can be deployed in order to manipulate and capture wind energy that interacts with the ship. In the hands of an experienced captain, the wings can generate up to 10 knots on their own, running the craft much like a sail on a zero emission basis.

More than a pretty face

This technology is not being intended purely for environmentally sensitive waterways, such as on ferries and through marinas and bays. Solar Sailor’s website suggests that every marine transport that operates at anything but constant high speeds should aim at utilising this advancement. The power generated from the Solar Wing, whilst not yet adequate to entirely support a constantly high speed motor, can be subsidised with a generator to power the electric drive direct. In these cases, whilst fuel is being used, it is done so in a much more efficient and environmentally aware manner.

The resultant system is beneficial to all relevant parties, providing a quiet, clean and smooth alternative to the petrol guzzling marine engines of the past. Passenger satisfaction has been one of the most notable occurrences during the Solar Sailor’s time ferrying around Sydney harbour. Captain Cook Cruises, the operating agent, reports that the craft has incited many a pleasurable response in its clientele, and competes exceptionally in its market. In a world when being ‘green’ is an ever increasing social currency, economically viable, environmentally sustainable alternatives such as the Solar Sailor will continue to gain justifiable popularity and praise.