The Australian solar market could be headed for a total capacity of 14GW of rooftop and utility-scale solar by the end of the decade, according to new analysis.

In a surprisingly buoyant forecast, global investment bank Citigroup has predicted that the annual installation rate for rooftop solar in Australia could rebound to more than 2.2GW a year by 2020.

It expects the Australian market – which totals around 3.5GW now, almost all of it rooftop solar – will grow from around 1,000MW in 2015 and surge above 2GW by the end of the decade. The solar forecasts for Australia, however, don’t specify whether this predicted growth trajectory factors in any changes to the renewable energy targets.

If the large scale RET stays in place, a large amount of utility-scale solar could be built in Australia – as Bloomberg New Energy Finance has predicted. Certainly, many companies such as US-based Recurrent Energy, Spain’s FRV and others have large pipelines of projects.

Regardless of this, Australia is seen as a strong market because of its excellent solar resources, and high electricity prices – particularly the network charges.

Utility-scale solar will also compete with wind energy in the coming years. However, at the rooftop level, the industry faces major hurdles with the government potentially removing the last price incentives, regulatory and pricing hurdles at state level – particularly the move towards higher fixed charges. 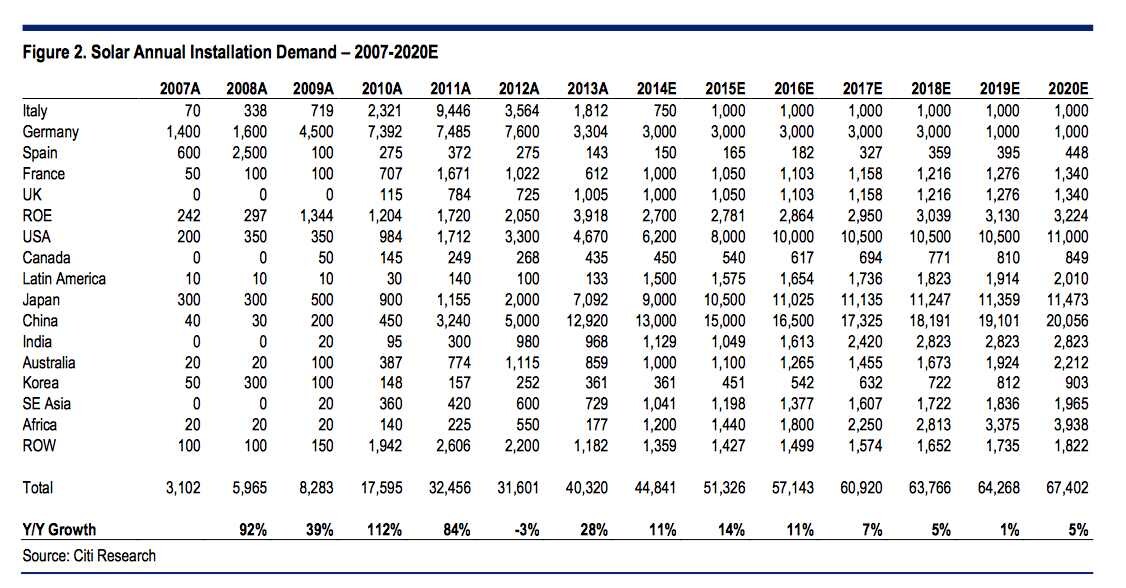 “While the US market appears positioned to grow in the next couple of years, there is still significant headwinds and time required for project approvals, despite strong long-term prospects,” the report notes.

For projects approved during accounting year 2012, already 9.7% or 182MW was cancelled as government push for completion of approved projects. “Although Japan is restarting its nuclear power plants, Japan market should still see strong demand given favorable return metric,” it notes.

In China, the Chinese Government had delivered a 15-point strategy to strengthen support for grid operators and power companies, to provide a more transparent industry.

The policy has addressed concerns such as power sell offs, clarity around grid-connection and operations and encouraging banks to lend at favourable rates to distributed solar power projects and has put increased pressure on local government areas to meet their end of year install quotas.