South Australia’s independent industry regulatory body–The Essential Services Commission of South Australia, or ESCOSA–has released a draft determination about its recommendations for the electricity retailers’ contribution to the state’s Transitional Solar Feed-in Tariff. From 27 January 2012 , the retailers’ contribution will be offered in addition to the 16c per kilowatt-hour (kWh) currently offered to solar customers. Since its introduction, the South Australia Solar Feed-in Tariff scheme has given a strong incentive for South Australians to install solar power, with over 47,000 premises signed up under the FiT scheme, resulting in a cumulative capacity of 120 megawatts (MW) of solar installed in the state. Until 30 September 2011, the rate for solar power fed into the grid was a generous 44c/kWh, which made going solar a financially viable option for many households and businesses in the state. Although less generous than previously, South Australia still has one of the highest Solar Feed-in Tariffs in Australia.

South Australian residents who apply for the state’s Transitional Solar Feed-in Tariff between 27 January 2012 and 30 June 2012 will be offered at least (16c/kWh + 7.1c/kWh =) 23c/kWh for every unit of electricity exported to the grid. Although a smaller amount than the previous 44c/kWh rate, the mechanism used to arrive at this new rate is slightly more complicated than it was before, and may mean more paperwork for new grid-connect solar customers.

The South Australia Feed-in Tariff was until 30 September 2011 offered at a rate of 44c/kWh on a net feed-in scheme, meaning that electricity customers with eligible grid-connect solar systems would be paid 44c for each kWh exported to the electrical grid, with no obligatory contribution from electricity retailers. Since the closure of the scheme (which coincided with the end of Victoria’s Premium Feed-in Tariff program), a transitionary feed-in tariff program has come into effect and the format of the incentive has changed, with the government now mandating a significantly reduced rate of 16c/kWh (a rate determined by ETSA Utilities), plus requiring a set contribution from electricity retailers who accept solar customers (a rate determined by ESCOSA). 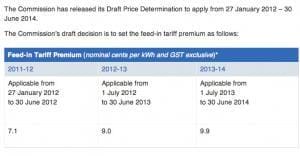 How will the two components of the SA Transitional Solar Feed-in Tariff scheme change over time? 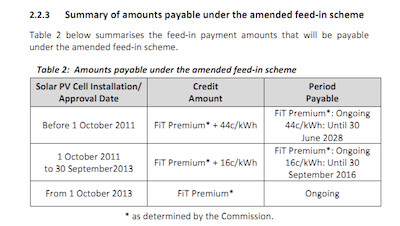 The Future of the South Australia Solar Feed-in Tariff