Echoing the conflicts currently underway in Australia, utilities in the American states of Florida and Utah are making efforts to slow down the progress of burgeoning solar industries there.

In the case of Florida, utilities recently voted to exclude solar advocacy group, the Alliance for Solar Choice (TASC), from a Public Services Commission energy conservation policy roundtable. As a blogger for the Broward/Palm Beach New Times points out, the likely reason for denying TASC’s request to participate in the proceedings is growing economic attractiveness of rooftop solar and its promise to compete with conventional utilities. The pro-solar group was allowed to sit in in 2008, when the US residential solar market was small, systems were more expensive, and the solar industry was presumably not seen as a threat to utility companies. Their participation back then is what has ensured the implementation of relatively favourable conditions for solar owners in the state for years to come. 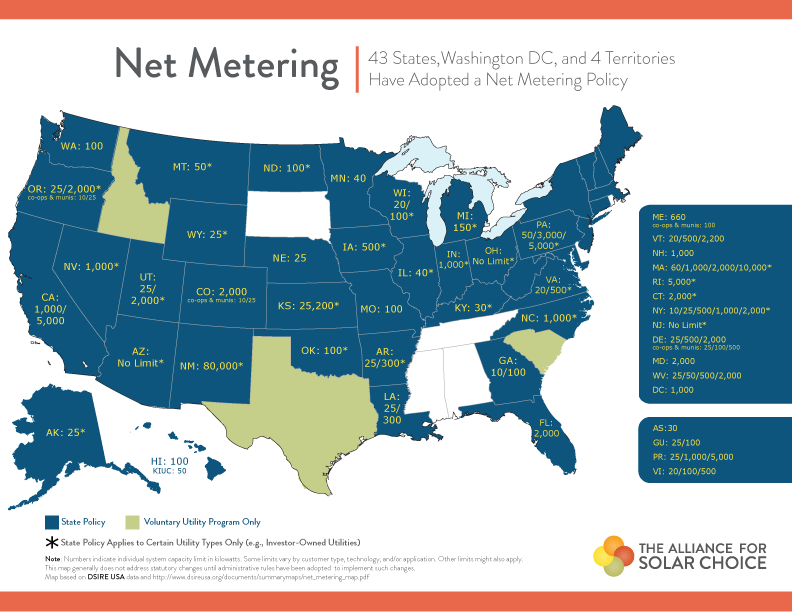 TASC’s advocacy focuses on the rights of residential and small-scale solar PV system owners to connect to the grid without prejudice, as well as on net metering policy, whereby solar system owners are credited on their power bills at a fair rate for exporting their excess electricity to the grid. The group has fought legal battles a number of states, including California, Arizona and Vermont. Thanks in part to TASC’s efforts, nearly every state in the union has adopted net metering policy (as per image above – click to enlarge).

From the Broward/Palm Beach New Times:

But when TASC filed [to attend the roundtable] on June 10 [this year], it was quickly swatted away by the utilities. All together — Duke Energy Florida, Florida Power & Light Company, Gulf Power Company, JEA, and Tampa Electric Company — filed a joint response opposing TASC’s appearance. Their response claimed that the solar trade group was not an organization of mom-and-pop businesses but wholesale solar suppliers and that the FEECA talks were not “intended to promote businesses, to protect business markets, or to protect the competitive economic interests of the solar industry.”

Not so, says Brandt.

“All of the sudden, the utilities no longer want the solar industry in the room because they want to proactively make sure that solar isn’t part of the energy mix in Florida,” he says. “They’ve been pretty open about the only solar they want in the state is large solar farms, not on people’s rooftops and their businesses.”

Meanwhile, in Utah, a utility attempt to hit solar customers with additional fees has angered solar proponents and solar industry players. As Climate Progress notes, the monthly fee on solar system owners proposed by utility Rocky Mountain Power has found little public support. Only around 2000 members of RMP’s customer base have solar PV systems, but this number is growing quickly: This year the residential solar market in the US has for the first time exceeded the commercial market, and the momentum looks like it will only continue to build. Although RMP’s solar fee is only $4.25 per month, the very idea of being charged for making a switch that is, for many people, made at least in part to gain a higher degree of independence apparently does not sit well with solar system owners.

Furthermore, when $4.25/month is multiplied by 12 months and 25 years (the expected lifespan of a normal solar system), it adds up to quite a bit of whatever initial investment was made. “When I heard about this net metering fee I got very concerned because the four and a quarter over a 25 year lifespan would really make a hefty chunk of a person’s investment,” said Mike Rosetti, a resident of Draper, Utah and founder of the loose-knit solar advocacy group Utah Citizens Advocating Renewable Energy (UCARE). “Depending on the size of their system, it could be 10 percent or even more because some people only put in four or five panels and this is a flat fee.” UCARE will be attending a Utah Public Service Commission discussion to stand up for solar system owners’ rights in the face of the proposed fee, much as TASC was had attempted to do in Florida.

Although RMP argues that it is concerned with loss of revenues from solar customers, the utility is also required by the Public Service Commission, its regulator, to consider the benefits. “My primary concern is the dampening effect this will have on residential choice … [T]he charter of the Public Service Commission is to consider both costs and benefits and Rocky Mountain Power is only bringing out costs and they are ignoring the benefits.”

For anyone following recent events in the Australian solar sphere–particularly surrounding the country’s embattled Renewable Energy Target–it’s hard not to notice the parallels: utilities, whose very business models are at risk should distributed solar continue to rise in prominence, are utilising whatever avenues they have at their disposal to protect the status quo. From Climate Progress:

It’s not likely to go away anytime soon. Barclays, a multinational banking and financial services company, recently downgraded electric utility bonds across the sector because they “believe that a confluence of declining cost trends in distributed solar photovoltaic (PV) power generation and residential-scale power storage is likely to disrupt the status quo.”

“That’s a big deal because we’re not just talking about reducing just what the shareholders can expect from the utilities and making them a less appealing investment, they’re talking about bankruptcy risk,” [Elias] Hinckley [an energy and tax partner with the law firm Sullivan & Worcester] said.

Barclays’ point about residential-scale power storage is particularly important, according to Hinckley. Currently, solar power follows demand and provides energy when it’s needed. But if advancements can be made to scale up storage plus distributed generation and provide customers with the reliability they currently depend on the utility for, then rooftop solar becomes even more of a threat.

The primary difference between the Utah and Florida stories, however, is that, whereas their battles are being fought primarily on a state-by-state basis (with plenty of victories), in the case of Australia the main battle taking place is on the federal level–and its outcome will accordingly affect the whole nation.