Solar PV system owners – generally speaking – do not like their electricity retailers. Maybe it’s just the sense of independence they get from generating a portion of their own electricity, but it also has to do with the feeling that they are not treated fairly – especially when it comes to the low, voluntary solar feed-in tariffs that are now offered by most retailers. ‘Why should I sell my solar into the grid for 6c/kWh when my retailer is just going to sell it to my neighbour for 27c?’ solar homeowners often grumble.

Australia’s retail electricity market is becoming more and more competitive as state after state deregulates the industry. In order to appeal to solar customers, some retailers have started offering what at first glance look like generous feed-in tariffs – as much as 10c/kWh in some cases. While still a pittance compared to the generous, state-sponsored feed-in tariffs of yore, these higher rates are understandably appealing.

But getting the most out of your solar system isn’t just about the feed-in tariff you get – these days it’s more about keeping your solar energy in the house – ‘self-consumption’. In fact, under further examination, some plans with high feed-in rates actually turn out to offer less value than those with lower ones. How is a solar system owner to separate the wheat from the chaff when it comes to their choice of retail electricity offers?

This is a question we’ve wondered ourselves – and for this reason, we’ve put together a tool whose purpose is to help solar homes make a meaningful comparison between plans. Our ‘Solar Friendly’ Retail Electricity Plan Comparison Tool lets solar homes compare up to four retail electricity offers and see how they perform against one another in a range of scenarios, taking into account solar system size, the amount of solar they self-consume (vs send into the grid), and other standard parameters like daily supply charges and per kilowatt-hour (kWh) usage charges.

Like our other tools & resources, the tool is 100% free to use for anyone. You can access it here. 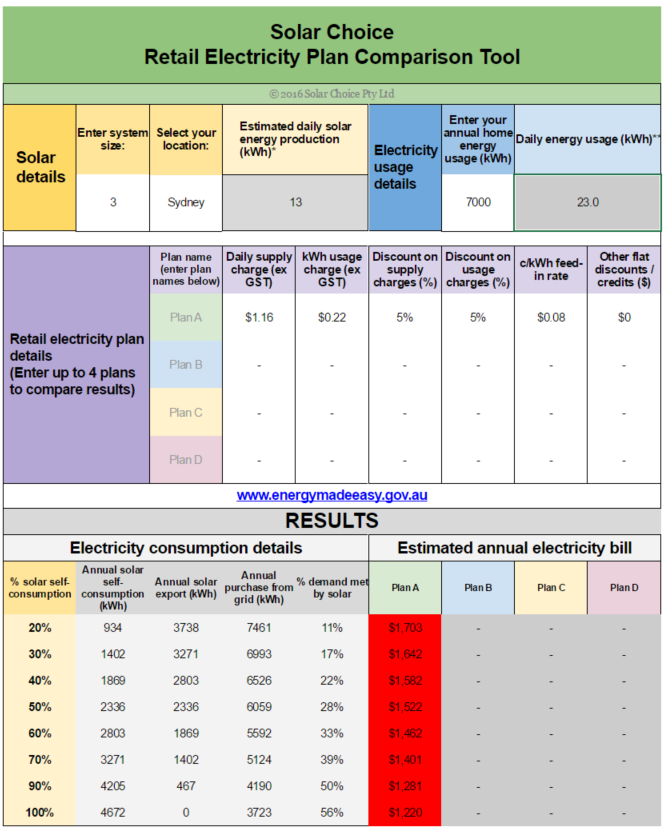