Solar panels work best when there is no shade cast upon them. In fact, a shadow cast on even just part of one solar panel in your solar array can potentially compromise the output of the whole system. What are some strategies for dealing with potential shading of solar arrays?

(This article was originally published in 2012. We have updated it to reflect new technological realities and to improve clarity.)

Why does shading have such a dramatic impact on energy production?

In most instances, solar photovoltaic (PV) systems for homes and businesses consist of solar panels (the collection of which is referred to as the ‘array’) and an inverter. The solar panels catch sunlight and convert it into DC (direct current) electricity, and the inverter in turn converts the DC electricity into grid- and appliance-compatible AC (alternating current) electricity.

Most small-scale solar systems for homes and small businesses will include anywhere from 6 to about 30 panels, although the ‘size’ of a system is usually referred to by its capacity (in kilowatts – e.g. 5kW). For technical reasons related to the voltage requirements of the system’s inverter, solar arrays are usually divided into ‘strings’ of solar panels. Small systems may only have 1 string, while large systems could have many more. One string could consist of a single panel, but usually they have more.

You can think of a string of panels as something like a piece of pipe, and the solar power is like water flowing through that pipe. In conventional solar panel strings, shade is something that blocks that flow. If, for example, shade from a tree or a chimney is cast on even one of the panels in the string, the output of the entire string will be reduced to virtually zero for as long as the shadow sits there. If there is a separate, unshaded string, however, this string will continue to produce power as per usual.

In extreme cases, a shadow does not necessarily need to fall on an entire panel – depending on the technology used in the solar panel in question, shading of even just one cell could flatten the output of the panel and in turn the entire string. Many modern panels, however, come equipped with devices called bypass diodes which minimise the effects of partial shading by essentially enabling electricity to ‘flow around’ the shaded cell or cells.

Strategies and technologies for dealing with shaded solar panels

Although the performance and therefore the return on investment (ROI) from a solar power system can be severely affected by shading – especially shading that occurs regularly due to an object that casts a shadow at the same time every day as the sun passes through the sky – there are a number of ways to avoid or mitigate these effects.

This is the first and most obvious step to making sure your system does not suffer the consequences of being partially shaded. It is extremely important to consider all times of day for all seasons of the year when working out whether some nearby object might cast a shadow onto your roof. A solar system installer should be able to tell you if shading will be a problem using a range of mapping tools. 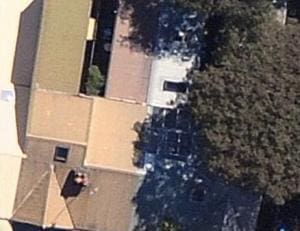 An example of a tree which has grown tall enough to cast a significant amount of shade on the solar array of a nearby roof – a situation that solar system owners will want to avoid.

Solar system owners should also be vigilant in making sure that there are no nearby trees which might grow tall enough to eventually cause shading issues. Solar system lifespans are typically expected to be 25+ years, during which time trees have plenty of time to grow.

Clouds are another source of potential shading. Clouds passing through the sky during the day may also result in fluctuations in system output, but these are basically unavoidable. Amorphous silicon solar cells are said to be better at handling shading than crystalline silicon solar panels, but generally speaking the relatively low overall efficiency of amorphous panels means that crystalline modules are generally a better choice.

There are some other technologies under development that may offer high efficiencies even in inclement weather, such as ‘super black’ solar cells, but most of these are still either expensive or not yet commercially available.

Use a string inverter that has MPP Tracking capability

Maximum Power Point Tracking (MPP Tracking or MPPT) is a technology that now comes standard in most quality inverters. An inverter equipped with an MPP Tracker (or several of them) is able squeeze the most usable energy possible out of a string of solar panels (even when shaded) by adjusting the voltage to always suit the inverter’s preferred input range. In a nutshell, an MPP Tracker helps to minimise output losses associated with partial shading and other panel output mismatches. Inverters without MPPT capability simply lose the output from the weaker string once it passes below the required output threshold. 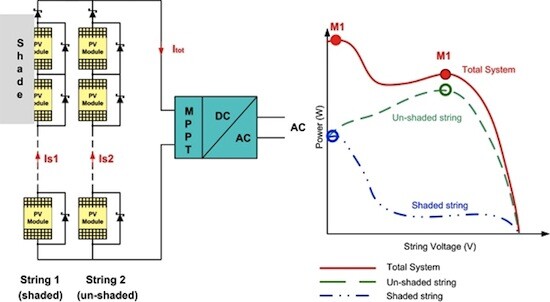 Get a system with microinverters or power optimisers

If the shading on your roof is not extensive (‘near shading’), then microinverters or power optimisers might be the right option for you. These devices get around the problem of partial shading by eliminating the need for or importance of strings in the first place. Both microinverters and power optimisers essentially allow every solar panel in a system to operate independently, so that overall system energy production is not disproportionately affected by just one or two shaded panels. (Space to watch: A newer technology by Maxim being used in a line of JinkoSolar panels promises to deliver even more granular shade protection than conventional microinverters or power optimisers.)

The main downside to these technologies is that they tend to be a bit more expensive than a system with a standard system containing a central string inverter, so there’s no need to splash out on them in instances where shading is not an issue. 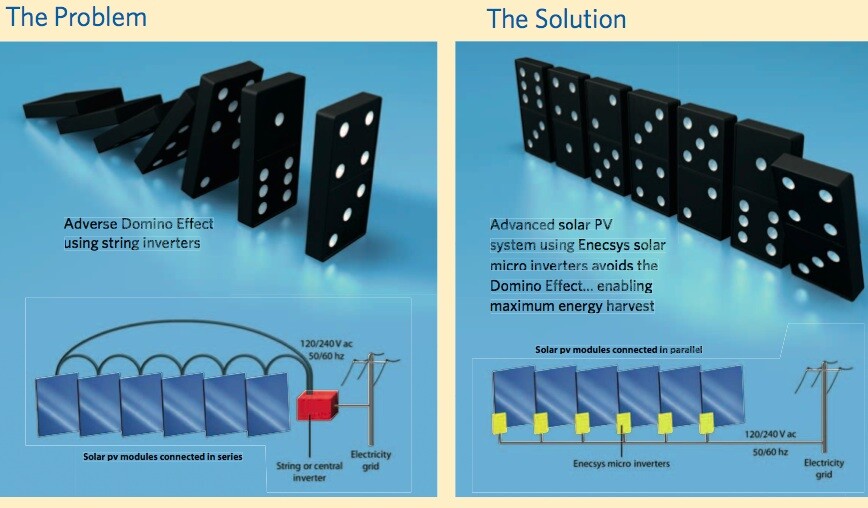 An illustration showing how microinverters/power optimisers can help solve the problem of partial shading on solar panels (via now defunct microinverter manufacturer Enecsys.)

Learn about battery storage: Check out our Battery Storage 101 page