Solar panel prices could fall in price from current rates of about 50c per watt to 36c/W by 2017, according to a report (“PV Technology and Cost Outlook: 2013-2017“) from GTM Research. Solar panels (or modules) are the most expensive component of a solar photovoltaic (PV) installation, and reductions in the cost of their production have significant implications for both end-users as well as the companies who manufacture them.

Solar PV technology prices have fallen dramatically in the past few years, and previous predictions of future prices have turned out to be above the mark nearly across the board. In 2009-2010, $1.00 per watt was seen as a realistic medium-term goal for the industry; in 2013, leading Chinese manufacturers are already nearing $0.50/W.

Depending on the city, region, and solar system size in question, the current cost of installing a full solar system in Australia–including panels, inverter, wiring, and other ‘balance-of-system’ components–can be as low as $1.40/W, sometimes lower. This is down from around $4/W in 2008.

GTM Research, while admitting the inherent fallibility of predictions of this nature, nevertheless endeavours to make some educated guesses about how manufacturers could reduce costs further, looking at trends to date and their likely role in the future. While price declines over the past few years were driven largely by the falling cost of the most integral part of the common solar panel–crystalline silicon–GTM anticipates that the bulk of future cost reductions will come from technological advances in the production process. 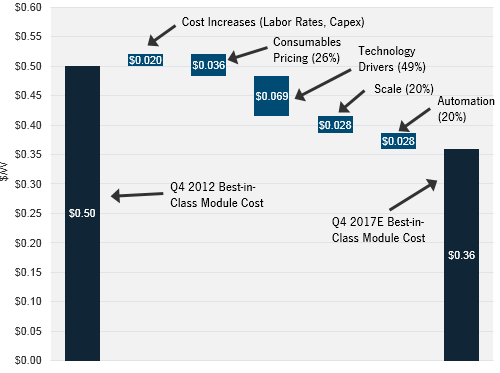 Although certainly lower than current prices, these future reductions may not trickle down to end users in the same way that they have done to date. Although fundamentally based on falling material costs, the price reductions in the past few years have been widely viewed as unsustainable for panel manufacturers, with prices unhealthily low relative to the cost of production. This has translated into slim or negative margins for most of the game’s biggest players, even resulting in insolvency for more than a few.

The companies that survive the current turmoil will need to become profitable again, meaning that not all of the cost reductions will necessarily be passed on to end-customers. On the other hand, it will also mean an overall more resilient solar industry, with fewer high-profile bankruptcies. For the end customer, this also means solar panel warranties that remain serviceable well into the future.