The August 2013 Solar PV Price Index marks 1 year since Solar Choice began publishing solar system installation prices in August 2012. While it is clear that figures have come down markedly for 4kW and 5kW systems since that time, cost reductions for the smaller system sizes–although present–have not been as distinct.

This month’s figures for were derived from a larger data set than usual for Sydney, Brisbane, Adelaide, and Perth. Conversely, the number of installers included in the Hobart calculations shrank slightly, yielding numbers that would at first glance appear to reveal huge installation price reductions there.

The table below contains the average solar system installation prices for all capital cities besides Darwin. Although Sydney and Perth are still home to the least expensive systems on offer (see $/W table in the following section), this month Hobart boasts the lowest average system prices when it comes to larger solar systems (3kW, 4kW, 5kW).

It is important to note, however, that only 2 installers were included in the Hobart calculations, with the remaining installer–offering a zero-down solar leasing deal–excluded. Meanwhile, the highest average system prices can now be found in Melbourne and Brisbane.

The following table shows STC-inclusive installation prices for 1.5kW, 2kW, 3kW, 4kW and 5kW solar systems. Where explicitly detailed in installer data, STCs accounted for a discount of about 66c per watt for the Zone 3 cities (Sydney, Perth, Adelaide, and Brisbane), and about 55c/W for Zone 4. No STC numbers were available in the data from Hobart or Canberra installers this month.

Average system prices continued to fall in the ACT (albeit more gradually) following the sharp drop that was observable between June and July. Prices in most other cities have similarly fallen in varying degrees, except for Sydney and (to a lesser degree) Brisbane, where slight rises were observable, possibly due to the inclusion of new installer data in those cities. The biggest change, however, as noted above, was in Hobart, with apparently sharp reductions across all system sizes. 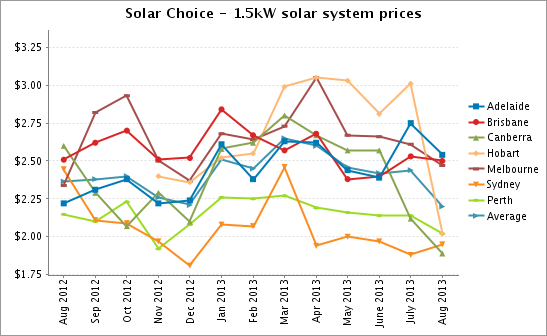 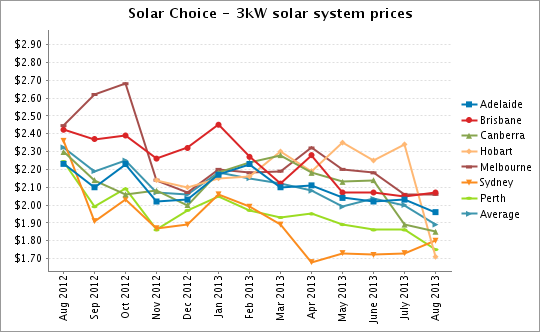 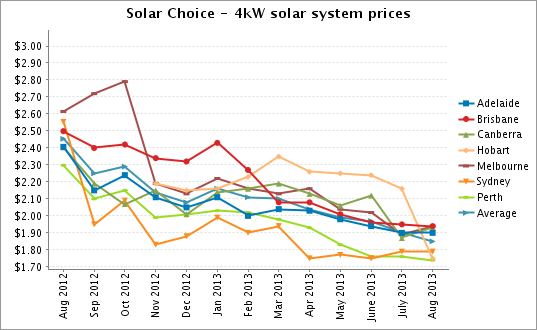 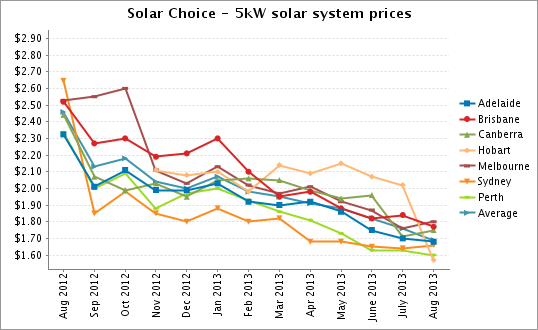