Things are changing fast when it comes to electricity in Australia, and Australian Utility Week 2015 (‘the year of the digital utility’) was a great place to catch a glimpse of the future. Attending the conference as a member of the solar industry, my thoughts gravitated towards what it all meant for homes with solar PV on their roofs. Here is my attempt to paint a picture of what the situation for solar homeowners might be like in a decade’s time.

It’s 2025 and you have solar panels on the roof of your home – this in itself is a common sight even in 2015. So what’s likely to be different?

Battery storage: On the grid or off the grid

First of all, if you have solar, you’ll probably also have an energy storage system – whether owned by you or owned by a third party (possibly your retailer) and leased to you. Your batteries may be helping you to live the dream of being off the grid (something that will undoubtedly be more financially feasible by then with battery costs coming down), but chances are that you’ll still be connected to the grid. Your motivations for staying grid-connected are likely to be selfish ones – having reliable grid electricity on tap, and the cost savings of not having to splash out on a solar + storage system that is much more than what you need on the average day to cover for extended periods of bad weather.

Whether your’re on the grid or off it, you’ll have an energy management system in your home (SMA, Enphase and carbonTRACK are just handful of the companies who provide such solutions). This may even be true for many homes that have neither solar nor storage. Your EMS will monitor and control the electronic devices used in your home in order to maximise the overall efficiency of your home – without compromising your comfort. If you’ve got solar or other small-scale distributed generation systems, your EMS may even plan the more flexible aspects of your electricity usage out ahead of time in accordance with the weather forecast.

Your home appliances themselves will on the whole be more efficient than their current day counterparts, helping you to meet most or all of your electricity demand domestically without having a massively outsized solar PV system and battery bank. Your EMS will also let you access all of your household electricity information and adjust settings and preferences via a smart phone app, but for the most part it will do its job behind the scenes, with little to no intervention on your part.

carbonTRACK is an integrated energy management system for homes and businesses with or without or without PV and/or storage. (Image via carbonTRACK.)

If you’re on the grid (which most homes will be), you’ll have a very different relationship with your utility than you do now – even if you don’t have to spend a whole lot more time thinking about that relationship. Your solar system will not be a ‘dumb’ ‘barnacle on the grid’ (to use Enphase cofounder Raghu Belur’s phrasing), but will instead be a key part of the system. Utilities will catch up with the likes of Amazon, Apple and pretty much every major bank in the world by offering customer-focused, web or smartphone-based interfaces & communications (probably via customer relationship management platforms like the one Opower currently offers) that let users view and manage what’s happening in real time so that they can take action and proactively avoid ‘bill shock’.

Opower provides electricity retailers with a platform that allows their customers to see usage patterns over time and in real time. (Image via Opower.)

Although there may be a small microgrid or two up and running by then, the network companies (“the roads, not the taxis”) that we have now will still play an essential role – but the physical networks will not see much expansion or augmentation between now and then, although we may begin to see strategic deployment of grid-level batteries.

These network companies could very well be tapped into your EMS or inverter (with your permission, of course) so that they are able to deliver electricity to all of their customers with the same sort of reliability as (and possibly more affordability than) they do now. They may even on occasion dispatch your battery bank or solar system (with a smart inverter or microinverters) to help maintain the quality of electricity on the grid. You’ll hopefully be compensated in some way for providing these services.

Your electricity retailer is also likely to be be tapped into your EMS, or will have its own interface through which you can monitor your electricity usage, the amount of solar and/or stored energy you’ve put into the grid . You may even be paid premium rates for exporting your stored electricity to the grid during peak electricity demand times (as Reposit Power and battery storage solution developers like Redback, Enphase and Sonnenbatterie – among others – are aiming to make possible).

Retailers will change the way that they charge their customers as well. Mojo Power is an electricity retailer that launched just weeks ago whose founder spoke at the conference. Mojo’s model could be a better fit than the cents-per-kilowatt  ‘user pays’ approach which is currently status quo. Instead, the company only passes through the wholesale costs of electricity to its customers with no markup and charges a monthly fee for membership. This decouples retailer profit from customer electricity usage – putting them in an unprejudiced position to help you use less electricity to maximise your savings. For bill-conscious solar households, this could be the perfect match. 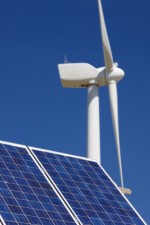 As for electricity generation, you’ll probably meet about 50% of your electricity needs without tapping into the grid, and as mentioned above, you’ll also be a market player. These distributed systems will meet a huge amount of the country’s collective electricity demand, and conventional generation plants (with an ever-increasing wedge of large-scale renewables) will fill in the rest. It’s unlikely that there will be large amounts of grid-level battery storage, but there might be a few projects up and running to support power quality and back up renewables.

But will it come to pass?

No one can see the future, but Australian Utility Week 2015 managed to gather under one roof (proverbially speaking) a lot of the people and organisations who will shape it. Through the conversations had and presentations made, a story begins to develop which is hard to ignore: The solar home in 10 years’ time will have a very different place in a substantially different electrical system.