Renewable energy industry peak body the Clean Energy Council has published an open letter to Coalition and Labor Party politicians in the lead-up to the federal election, calling for bipartisan action on cutting electricity emissions and costs.

The letter, signed by some of Australia and the world’s leading renewable and clean tech companies calls for a strong and enduring policy to set a clear course for lowering our emissions in the electricity sector.

It notes that Australia’s renewable energy industry has delivered remarkable levels of investment over recent years, including a record-breaking $20 billion in solar and wind in 2018.

But the letter warns that the booming sector is at danger of losing precious momentum, with the fulfilment of the Large-scale Renewable Energy Target, and no further guiding policies beyond 2020.

“We have the skills and expertise to transform Australia into a clean energy super power. Don’t stop us now,” the letter continues. “We can’t afford to waste any more time.”

The letter is addressed to all politicians, but it is the Coalition that appears to be the most out of touch with voter sentiment, and the global reality, on matters of climate and energy.

A scathing report from the Climate Council on Tuesday said the Liberal National Party’s tenure in government had been characterised by slashing funding to climate science, cutting climate programs, rejecting expert advice, making false and misleading claims, and consistently covering up poor performance. 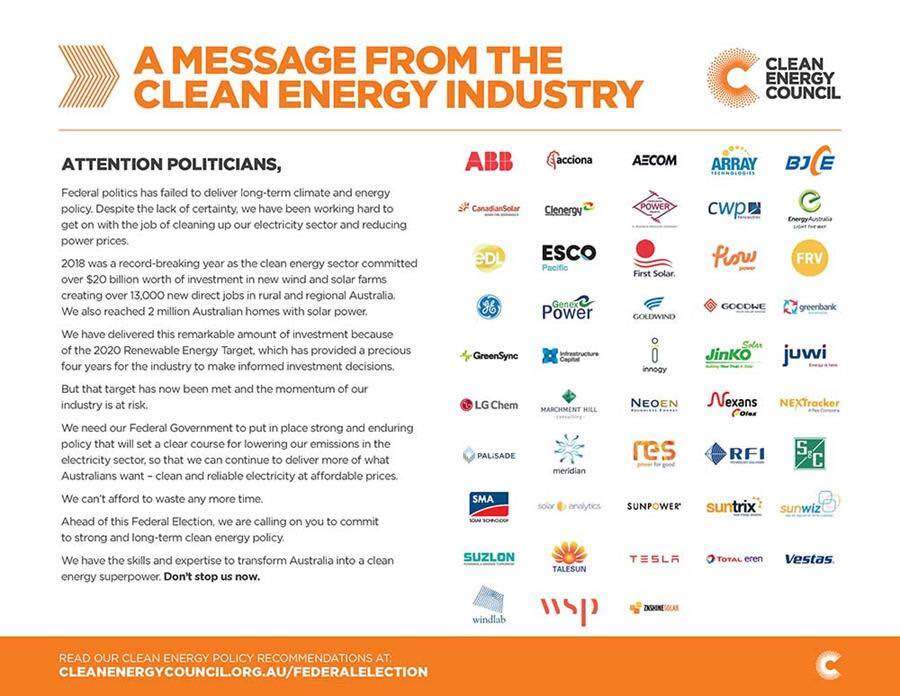