US social media giant Facebook has revealed plans to source 100 per cent of its electricity needs from renewable energy by 2020, extending the goal across its entire operations.

The global internet company has been building numerous wind and solar farms in north America and Europe to match its new data centres, and says it is one of the largest corporate purchasers of renewable energy.

It exceeded its goal of reaching 50 per cent clean and renewable energy in 2017 – a year earlier than was targeted. 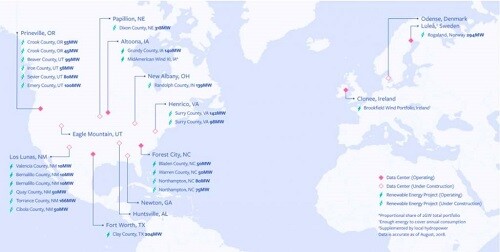 “Since our first purchase of wind power in 2013, Facebook has signed contracts for over 3 gigawatts of new solar and wind energy, that includes over 2,500 megawatts in just the past 12 months,” Facebook said in a blog post announcing the commitment.

“We are now aiming for 100 per cent across all facilities, including office and data centers,” it said.

“Our goal is to be at 100 per cent renewable energy in our company-wide energy mix by the end of 2020.

“All of these wind and solar projects are new and on the same grid as our data centers,” Facebook says.”That means that each of these projects brings jobs, investment and a healthier environment to the communities that host us — from Prineville, Oregon, and Los Lunas, New Mexico, to Henrico, Virginia, and Luleå, Sweden.”