Solar panel tilt angle and orientation are two of the most important factors in determining how much electricity your solar panel array will generate. If you live in Australia and have a grid-connected solar system, your solar panels will be installed at the angle and aspect of your roof. In most cases – provided you have an unshaded, north or east & west-facing roof (depending on location) that is has some incline – this is the most economical approach, and your solar power yield will not be significantly less than if the panels were installed at the ‘perfect’ angle and orientation. But what should you do if you have a flat roof? Is it ever worth it to have your solar panels installed horizontally?

To tilt or not to tilt: Solar panels on a flat roof

Installing your solar panels at the ideal tilt angle and orientation for your latitude ensures that your system generates as much electricity as possible for your location. The ideal orientation for a solar panel array is due north, and the ideal tilt angle is the angle of your latitude (e.g. about 30 degrees in Sydney and Perth). Small variations away from these ideals will not result in a significant difference in the power output of your solar energy system, which is why the natural tilt angle of your roof is usually fine (and keeping that tilt frames can add significantly to the cost of your system, putting a damper on the value of the solar power it produces).

Solar panels installed on a nearly flat roof at Downfields Engineering in Toowoomba. 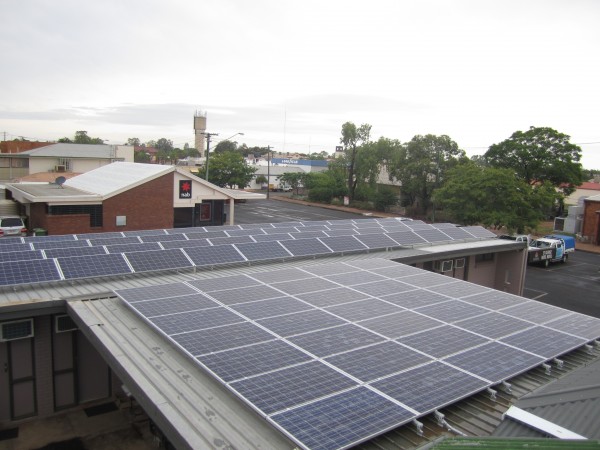 Solar panels installed horizontally on a roof at the St George Hotel in St George, QLD.

However, industry best practice in Australia is to ensure that panels are at least slightly tilted – so that the panels can better ‘self clean’ when it rains. It’s also worth noting that many roofs naturally have some degree of tilt – aluminium roofs, for example, usually have a pitch of about 3-4 degrees. Concrete or membrane roofs are the most common roofs that are truly horizontal – in which cases a tilt or ballast system is frequently used to give the panels at least a 10-degree pitch.

If the roof is truly flat, there are a limited number of situations in which installing your panels horizontally (or nearly horizontally) might be worth it for you. These are:

A note about dust accumulation on flat solar panel arrays

One other thing to keep in mind if your panels are horizontal is that they will not self-clean as effectively as panels at a tilt – dust has a higher chance of accumulating and impeding electricity production. The drop in performance due to dust accumulation on panels is roughly between 5% and 10%. On the other hand, solar panel arrays tilted at an angle – even a slight angle – are more likely to be washed clean when it rains.