Medium-sizes power plants will account for nearly half of the new solar PV capacity to be built in the world’s leading solar markets over the next few years, according market research firm NPD Solarbuzz’s Global Deal Tracker report. According to Solarbuzz, although there are 4,300 projects accounting for 95GW of solar capacity in the global pipeline, plants over 5MW number only around 500. The remainder are in the range of 250kW-5MW.

“While projects in excess of 50 megawatts account for most of the solar PV pipeline capacity, smaller projects up to five megawatts can typically be approved and completed within a matter of months, making this segment particularly interesting to suppliers and developers,” said Solarbuzz analyst Chris Beadle.

The large quantity of the smaller projects seems to highlight the growing attractiveness of solar as an alternative to conventional fossil fuels or grid electricity in commercial and industrial applications, with utility solar plants being fewer in number. Much of this interest is doubtless thanks to government incentives, but it is also thanks to the falling cost of solar PV technology.

The report focuses on the handful of countries that Solarbuzz says will collectively make up 80% of the global solar market in the next few years. These are the US and Canada in North America; China, Japan, India, Thailand and Australia in the Asia-Pacific region; and Germany, the UK, Italy and France in Europe. Of these, China, Japan, and the US will lead the way in 2014–a marked departure from the dominance of Europe that has been the norm for since the global solar boom began several years ago. 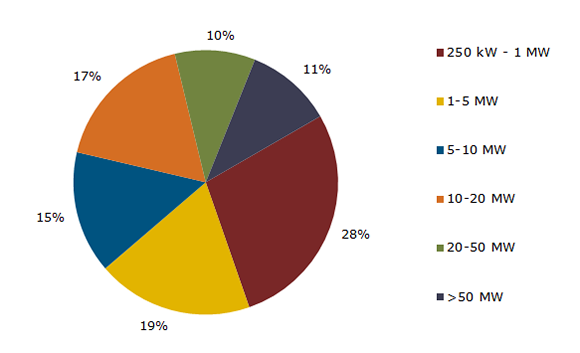 95GW of anticipated solar capacity growth, broken down by project size. Small-medium projects are by far the most numerous. (Chart via NPD Solarbuzz Global Deal Tracker.)

Putting the size of these plants into context, the largest solar PV plants in the world are in the range of 250-300MW, although a number of these are still under construction and once completed will actually be much larger. Arizona’s Mesquite Solar Project, for example, although now only around 150MW, will be 700MW by the time it is completed–roughly the size of a small coal-fired power plant.

Although residential and commercial solar power have taken off phenomenally in Australia, as noted previously, the country has yet to fully tap its potential for larger projects. The largest solar plant currently operational in Australia is the WA’s Greenough River Solar farm, which is currently 10MW in capacity but slated to grow to 40MW. Meanwhile, the 150MW Broken Hill/Nyngan Solar Plant (a government-backed Solar Flagships project) started construction earlier this year. This makes it the largest plant currently being built, but not the largest one planned for Australia.