Prime Minister Julia Gillard has brought electricity market reform to the forefront of the clean energy debate, publicly calling on state governments to rein in rampant electricity prices. The crux of the issue is this: because generation, transmission, and distribution of electricity are conducted through state-owned entities, electricity is a revenue-earner for many state governments, they are therefore reluctant to implement changes. This has been the primary driver in the dramatically escalating electricity prices that have been seen across the country in the past few years. In spite of this, the Carbon Tax and other ‘green schemes’, which play only a relatively small role in the price increases, have been copping the bulk of the blame in the media and from the Opposition.

Debate surrounding whether electricity markets need reform is not new. In his 2007 Climate Change Review, professor Ross Garnaut pointed out the fact that most of the existing state-based electricity generation and retailing models result in perverse incentives, birthing overpriced investments in electricity infrastructure upgrades and driving up prices for end-users. The federal government’s Draft Energy White Paper, released at the end of 2011, also highlighted the issue, citing it as one of the major factors in the decreasing affordability of electricity.

Only recently, however has the PM decided to get on her ‘front foot‘, even stepping up to deliver a speech on the issue herself (Energy and Resources Minister Martin Ferguson was reportedly originally slated to do this). In no uncertain terms, she sets the record straight: “At the heart of all this is a simple market design problem: a clear regulatory incentive to over-invest in infrastructure and pass on costs to consumers.”

The timing of Gillard’s raising of this issue may indeed be politically opportune, given that it comes just over a month after the Carbon Tax came into effect, and just before homes and businesses get their first Carbon Tax-inclusive power bills. This does not bring into question the validity of the problem, however. Abbott was soon contradicted by some of the big names in his own party, including Coalition energy spokesman Ian McFarlane and federal MP Martin Turnbull.

McFarlane told the Sydney Morning Herald that the issue of over-investment in infrastructure was indeed on the Coalition’s agenda and ”absolutely a question for a Coalition government”, hinting also that Gillard’s national tabling of the issue came about 5 years too late. ”The biggest immediate pressure is the carbon tax but I accept electricity prices have risen because of unnecessarily high distribution costs … the government knew these astronomical price rises were coming through the system because of transmission investment and they’ve been asleep at the wheel. We wouldn’t be,” McFarlane said. Turnbull likewise stated that it would be legitimate to investigate “whether the level of investment has been excessive, whether there has been gold-plating”.

RenewEconomy provided analysis of the goings-on, as well as a component-by-component breakdown of the price of electricity in its roundup of this week’s news. The chart below is from that article. 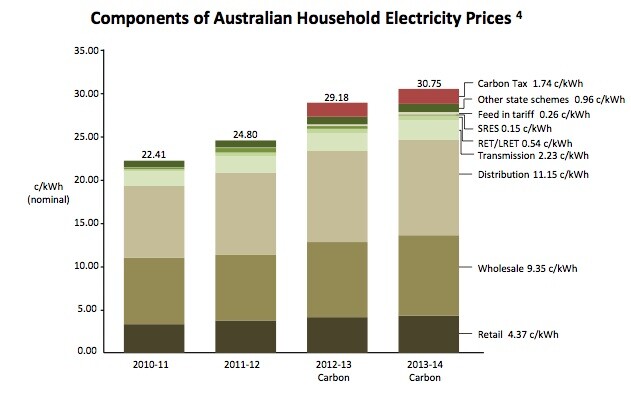 Price components of Australian electricity bills: 2010 to 2014 (Image via RenewEconomy.)