Given the erratic nature of weather, is it really possible to predict exactly when, where and how strongly the sun shines? A group of European researchers seems to think so.

A new EU-funded research project, MACC II, is now providing up to minute-by-minute solar radiation data with a 3-5 km spatial resolution for any location on the planet from 2004 until the present moment. This high-resolution data is generated by using a recently published climate model, which was found to correspond well (95% accuracy or better) with actual measured data at various locations worldwide including Australia.

The fully functional data service will be available later this year as part of a European information infrastructure; however, raw minute-by-minute data for all global locations is already available in beta form at the project’s website (free).

The data is produced using the ‘clear sky’ model for estimating solar radiation. In addition to information on water vapour and ozone, the model includes best estimates of aerosols that are based on observations as well as computer simulations. By combining this information with cloud data derived from actual satellite measurements, scientists are able to calculate the radiation reaching the surface of the earth at any given location and time.

Although any amount of light will cause a solar system to generate electricity or heat, PV panels (particularly concentrator systems that use mirrors) work best when they are in direct line of sight from the sun – much better than in bright but diffuse conditions (such as when the sun is behind the clouds or when it’s very hazy due to smoke or pollution). See the picture below for an illustration of this effect. 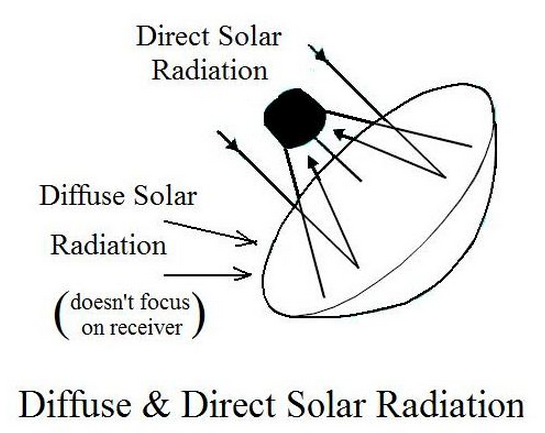 Most solar data, such as that available from the Bureau of Meteorology, typically presents global radiation (which includes diffuse as well as direct radiation). However, it is the direct component that is more important for predicting the performance of flat-plate PV and concentrated solar power (CSP) systems.

“Forecasts are important because the promoters need to know the future output of their plant,” says Lourdes Ramirez Santigosa, head of the Madrid-based solar radiation group at CIEMAT. “If you know when the electricity is produced, you can get a better price on the market,” she explains.

Moreover, high resolution data is required for any useful prediction. As Ramirez explains, “For planning of CSP plants, we need at least an hourly resolution of solar radiation data covering ten to 20 years”, which few existing data sources currently provide.

Of all the factors impacting the direct solar radiation, clouds have the biggest influence. However, in clear-sky conditions, it is the aerosol data that is more important as aerosols can scatter or even absorb light, which is subsequently no longer available for concentrating solar power systems.

Marion Schroedter-Homscheidt, a scientist at the Remote Sensing Data Center of the German Aerospace Center says that including aerosol data into solar forecasting models “is indeed the next step” and surmises that “it is the aerosol data the solar industry is particularly interested in”.

Armed with higher quality data, the researchers have tweaked their model and compared it to measured data from 11 sites around the world including Alice Springs. The resulting

accuracy for average global radiation is 95% or better for all sites (98% for Alice Springs). According to Ramirez, this data “is the best available for long term assessments” and quips that there is “room for improvement”.

It is expected that models will become more accurate over the next few years and will be able to deliver spatial resolutions of ten metres and up-to-the-minute data. This will enable CSP plant operators to extract maximum power by better simulating temperatures within the solar panels and fine-tune the orientation of CSP plant mirrors.

Best of all, this information is in the public domain and available for the same price as the solar radiation that powers our PV and CSP systems – free!