The new record is the result of a joint research effort with GE Energy and incidentally, the previous record of 19.6% efficiency was achieved in 2013 by GE Global Research, which First Solar acquired in April 2013.

The announcement comes only a few months after First Solar announced the largest quarterly reduction in module fabrication costs late last year and is part of a longer-term R&D effort from First Solar to act on a bullish technology and cost roadmap it announced in collaboration with Intermolecular in 2012.

Prior to selling its CdTe R&D assets to First Solar, GE aimed to create modules with routine efficiencies of 15% and had previously mentioned the possibility of achieving over 20% efficiency. First Solar’s Chief Technology Officer, Raffi Garabedian comments, “The synergy realized in our partnership with GE also demonstrates the value of our consistent and strong investment in R&D”.

The CdTe technology championed by First Solar claims a number of technical advantages including better tolerance to high temperatures, the smallest carbon footprint, lowest water use, and fastest energy payback time compared to all other solar PV technologies. However, CdTe’s biggest advantage is cost, with manufacturing costs expected to go below USD $0.49 over the next year (see graphic below for First Solar’s cost roadmap) – making them an apples to apples comparison with multi-crystalline modules. 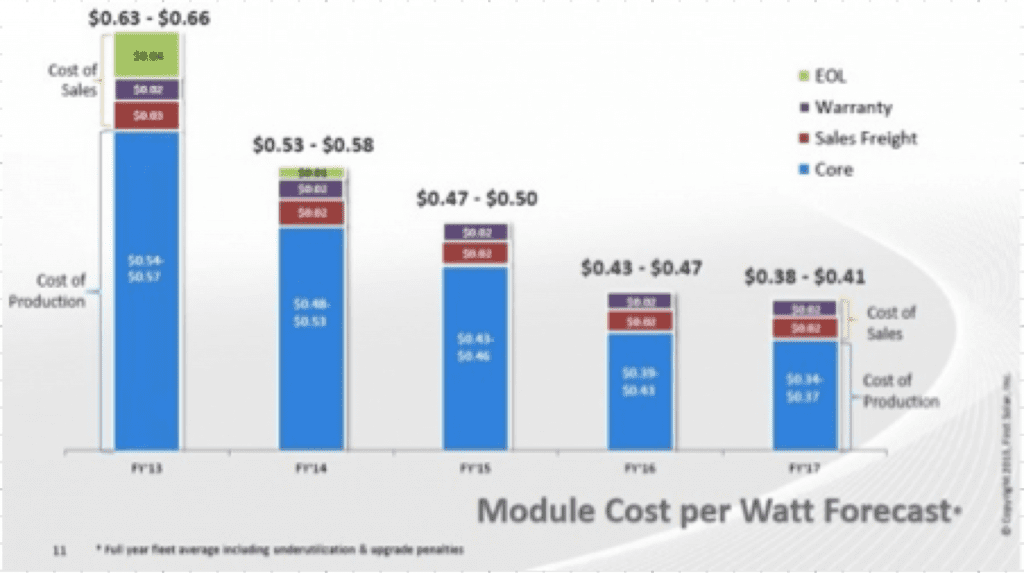 Says Garabedian, “This record marks another achievement in our mission to unlock the industry-changing potential of CdTe PV…We are demonstrating improvement in CdTe PV performance at a rate that dramatically outstrips the trajectory of conventional silicon technologies, which have already plateaued near their ultimate entitlements”.

The steady increase in industrial module efficiencies reported by First Solar in recent months – the last being 13.9% at the end of 2013 – as well as the fact that the record-setting cell was constructed at First Solar’s Perrysburg-based factory/R&D centre gives hope that the new cell technology will result in more efficient commercial modules soon. Garabedian claims, “The advanced technologies and processes we developed for this record-setting cell are already being commercialized and will positively impact performance of our future production modules and power plants.”

Apart from targeting higher efficiencies and lower costs, First Solar has also been making the news in Australia for other reasons: Barely a month ago, the vertically-integrated company, which provides not only panels but also engineering and procurement services, broke ground on the 102 MW Nyngan solar farm, New South Wales’ first commercial solar farm and Australia’s largest so far.

Nitin Nampalli
Nitin is a regular contributor to Solar Choice News with a focus on solar PV technology. He holds a Master of Engineering Science in Renewable Energy from UNSW and a Bachelor of Science degree in Microelectronic Engineering from Rochester Institute of Technology, New York. He is currently a PhD candidate researching solar photovoltaics at UNSW. In addition to his studies, he has also worked extensively in solar PV research.
Latest posts by Nitin Nampalli (see all)