When electricity demand peaks, it not only requires power plants to be fired up to meet the demand, but also increases the price of electricity. For example, in the US, 10-20% of the net electricity cost is due to the cost of meeting peak grid demand that occurs for only 100 hours of the year (1.1% of the usage time in a year)!

In light of this, many countries have placed an upper limit on a household’s peak power consumption (called a demand cap or ‘pipe’). The idea is based on the assumption that peak demand on the grid occurs exactly when individual households have their maximum demand. While this approach has worked to reduce peak grid demand in some countries, researchers from the Australian Photovoltaic Institute (APVI) think it may not work as well in Australia.

Based on a study on power usage patterns of 361 houses in Australia, researchers have discovered that, while the aggregate demand peak (when demand from all houses is added up) occurs in the summer, less than a third of the individual demand peaks (time of the year when individual households use the maximum power) occurs in the summer. In fact, half of the individual demand peaks occur in the winter. This can be seen in the pie charts below, which show the season when individual peaking occurs for two different data sets (all residential users).

Moreover, while the most common time for individual household demand peak is 5 to 7pm, more than half of the houses studied peaked outside this time. And this applies to summer and winter-peaking houses alike.

What this means for demand reduction is that while the aggregate behaviour of residential electricity users causes peak demand at a certain time, most houses are, in fact, not using maximum power individually at that time.

Hence, using a ‘pipe’ approach to reducing grid demand – by forcing households to keep their peak demand below a certain level regardless of the time of day – may not actually reduce the peak grid demand significantly in Australia, which is the ultimate goal. In fact, such an approach can unnecessarily penalise households who peak when the network isn’t peaking.

Researchers found that applying a 6 kW ‘pipe’ on the houses studied would result in only a 5.2% reduction in peak when the entire network peaks, but would result in more than twice as much reduction (17.4%) at other times, thus making it an ineffective policy.

This can be visualised more easily in the figure below by considering the blue dots on the vertical axis, which represent the power demand when individual household peaks occur (at any time of the year). Compare this to the red line (which represents the power demand of each of those houses when the network is peaking due to high aggregate demand). 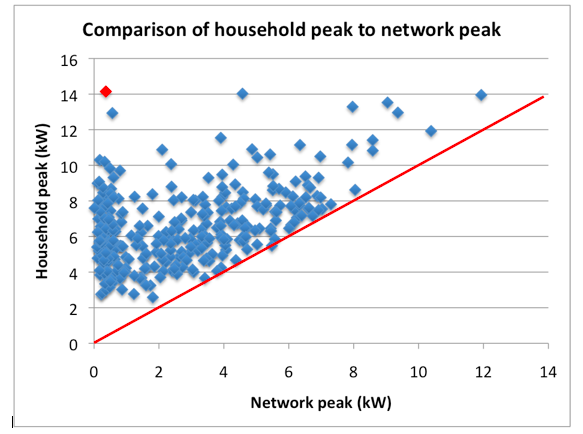 But in fact, only one such household is found where the blue dot lies on the red line. All others lie above the red line. For example, the red dot at the top of the graph marks a household whose individual annual peak is 14.15 kW, but was contributing only 0.36 kW during the network peak. Thus, applying a ‘pipe’ to that particular household would not impact the network peak!

Nevertheless, demand limits of some kind are expected to increase customer awareness of their own demand. For example, a demand charge that penalises households for using more power during network peak times may incentivise households to reduce usage at such critical times. However, customer education and a gradual introduction will be crucial to ensuring that householders aren’t suddenly shocked by new charges.

To clarify to our readers, no such demand limits currently exist or have been announced in Australia. Such demand charges, if ever implemented, are also likely to be low for households with solar PV, particularly for customers who try to maximize self-consumption (i.e. whose power usage peaks during the day and not when the network demand peaks).

A more elegant approach, however, may be the use of smart meters, and remote monitoring and automated control of high-power appliances. These can reduce demand in only those seasons or at those specific times when the network or the local grid feeder is known or expected to peak – all with minimal impact to the end user. However, the infrastructure, equipment and large-scale changes needed to implement this are not trivial.

Considering that demand reduction and regulation of distributed energy like solar is increasingly becoming important to grid regulators worldwide, APVI’s continued research into these approaches with an Australian-centric focus continues to be very valuable.