The breakthrough is a result of a 4-year collaboration between DuPont and REC, who have been working on optimising the performance of metallisation pastes at REC’s manufacturing facility in Singapore.

While results are yet to be announced on average production figures, earlier projections from REC suggest that the fraction of their 60-cell modules with peak power of 250W or more may be up to 95% as of Q4 2013 – up from 55% just a year earlier. 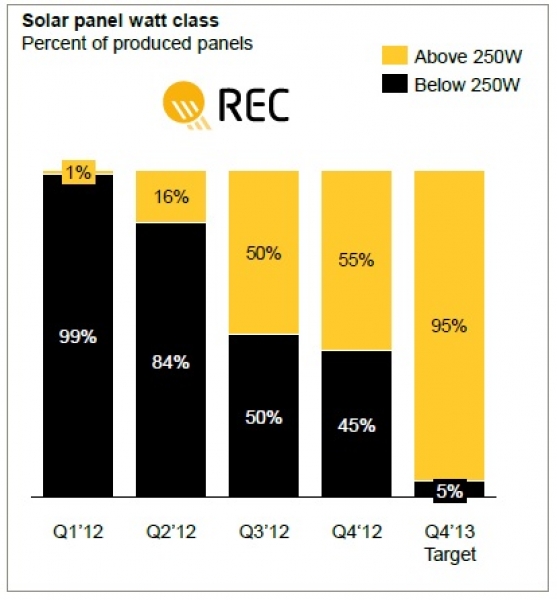 REC had previously reported that its multi-crystalline cell efficiencies have gone up from 16.8% in 2011 to 17.1% in 2012, with financial statements suggesting ongoing efforts to improve module efficiencies by optimising performance of the front and rear-sides of the cell, which – in this case –were enabled by optimising the cell metallisation.

Metallisation is an important step in the cell manufacturing process and is critical to creating electrical contacts to the underlying silicon, thereby allowing power to be extracted from the cell. Metallisation is also important from a cost standpoint as it involves the use of pastes made of expensive metals such as silver and aluminium, all of which add to the final cost of a module.

Due to increasing pressures on the PV industry to cut costs, manufacturers have been pressed to find ways to reduce the amount of silver applied per cell while at the same time develop a metal paste that is compatible with higher-efficiency solar cell structures. DuPont has managed to strike this fine balance through its well-known Solamet series pastes, the latest of which offers a 3-3.5% relative efficiency improvement over conventional pastes.

Such seemingly small but steady gains are key to maintaining the PV industry’s growth trajectory. According to Peter Brenner, Global PV Marketing Manager of DuPont, “Constant innovation in Solamet pastes has been instrumental in ensuring the efficiency improvements and cost effective measures that are moving the solar industry toward grid-parity”. Mr. Brenner also added that “[c]ollaborations with leading companies like REC are critical to the quick delivery of new and improved technologies that fuel further growth in the industry, and for our customers.”