Nev and Linda Sweeney have been living on their 500-square-meter suburban plot in Sydney’s St Clair Suburb since the early 1980s, and have been trying to live sustainably using the resources on their land for almost just as long. Their approach includes innovative energy generation and efficiency strategies (including off-grid as well as grid-connected solar panel arrays), a permaculture-style integrated food production system, and an army of low- or zero- energy input cooking devices including at least 2 different types of solar ovens.

I visited the Sweeney’s residence for Sustainable House Day 2011 ostensibly as a volunteer, although,  due to the irregular flow of visitors throughout the day, I felt more like a guest. Through talking to them and seeing their home in action, I gained an understanding of some of the challenges and successes that they have experienced  in their drive to transition to self-reliance over the past 3 decades. Their adventure has required a lot of innovation, experimentation, and trial-and-error, but the home has through this process reached its own equilibrium of inputs and outputs, and the couple has become something of a model for how sustainability can work in practice on a suburban plot.

Harnessing the power of the sun: solar panels and solar cookers

The property is a showcase of innovations related to resource flow–most notably the Sweeney’s impressively well-integrated food production system which produces, among broad beans, eggs and many other edibles, 40 to 50 kilograms of chokoes per year. The most interesting aspects of the home for the purposes of this article, however, are the parts that utilise the power of the sun to reduce the home’s energy use–solar panels and solar cookers.

Chokoes are vigorously-growing vine fruits that taste like cucumbers but have the texture of carrots. They grow like mad over the Sweeneys’ orange tree.

Nev and Linda have probably one of the only homes in Sydney that has both a grid-connected solar array as well as an off-grid array. The older of the two is the off-grid system, which Nev installed to power only certain appliances in the home–most notably a number of re-wired lights that run directly off the DC electricity produced by photovoltaics (PV) array and its associated battery bank (which has now been replaced twice). It began 25 years ago when Nev installed a round-celled BP Solarex solar panel and the first set of batteries. The next addition to the system came 17 years ago when Nev added another panel to the array, and the last addition when Nev inherited 4 x 80W panels from his brother. The overall output isn’t easily quantifiable in watts, but the voltage of the array is 12V, which is enough to keep the battery bank charged and operating. The batteries supply a good part of the electrical needs of the house. 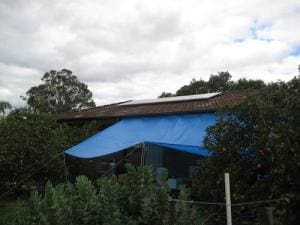 The Sweeneys’ 1kW grid-connected solar array, visible on their roof above their fruit trees in the back yard

In addition to Nev’s hand-assembled array, the roof of the house is also home to a professionally-installed 1kW grid-connected solar power array. This array was installed on the roof of the house when Australia’s solar power incentives were at the height of the frenzy–a high ($40) REC/STC price from the federal government and a 60c/kWh gross solar feed-in tariff from the NSW government under the now defunct Solar Bonus Scheme. Although the Sweeneys saw little actual need for the array, especially with one of their own already up and functioning, the decision to have the panels installed was a financially obvious one, and the up-front cost was relatively insubstantial for the returns they can expect from it over the life of its operation.

The Sweeneys’ off-grid solar system, located on garage roof. The batteries and inverter are kept in the garage.

Cooking with the sun: Solar ovens and more

In addition to using the sun to generate electricity, the Sweeneys also use solar energy to cook their food. On Sustainable house day, their yard was full of different models of home-made solar cookers, one of which was quite impressively in the process of preparing a lamb roast for

dinner. The oven works even on cold days, albeit slightly more slowly than on hot ones. There are about five different ovens and other cooking and food-drying devices that Nev and Linda have assembled and use regularly in preparing their meals. For those interested in assembling their own solar ovens, you can learn more on SolarCooking.org. 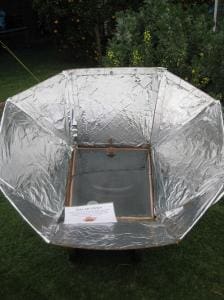 Cooking a lamb roast in one of the solar ovens in the Sweeney’s back yard. It needs to be rotated to point towards the sun, but can work even on cool days. 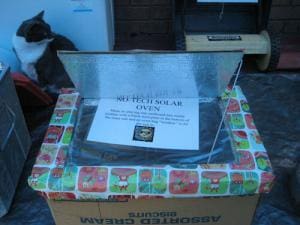 ‘No-tech’ Solar power oven, made out of cardboard, aluminium foil, and other household materials.