In an interesting case of biomimicry, scientists at Stanford University and the SLAC National Accelerator Laboratory have designed a new electrode material for lithium-ion batteries using silicon nanoparticles clustered like seeds in a tough carbon rind – much like a pomegranate.

The negative electrode (called the anode) is particularly important in lithium-ion batteries as it stores charge when the battery charges. The amount of charge that can be stored per gram of material varies widely depending on the anode material. Typical lithium-ion batteries use graphite anodes; however, scientists have been attempting to replace graphite with silicon as it has one of the best available energy densities – over 10 times more than graphite.

However, since anodes swell and shrink during typical charge-discharge cycles, a brittle material like silicon can not only break apart very quickly with usage, but can also react with the battery’s electrolyte to form a coating of gunk on the anode, further degrading its performance.

Stanford Associate Professor Yi Cui and his team have worked to overcome this problem by using extremely fine/small silicon nano-wires or nano-particles and encasing them within shells of carbon, which give them room to swell or shrink during the charge-discharge cycle. In their latest work, they have added a second, thicker coating of carbon over the filled shells. This acts like the rind in a pomegranate and holds the individual shells together and allows an easy flow of current. 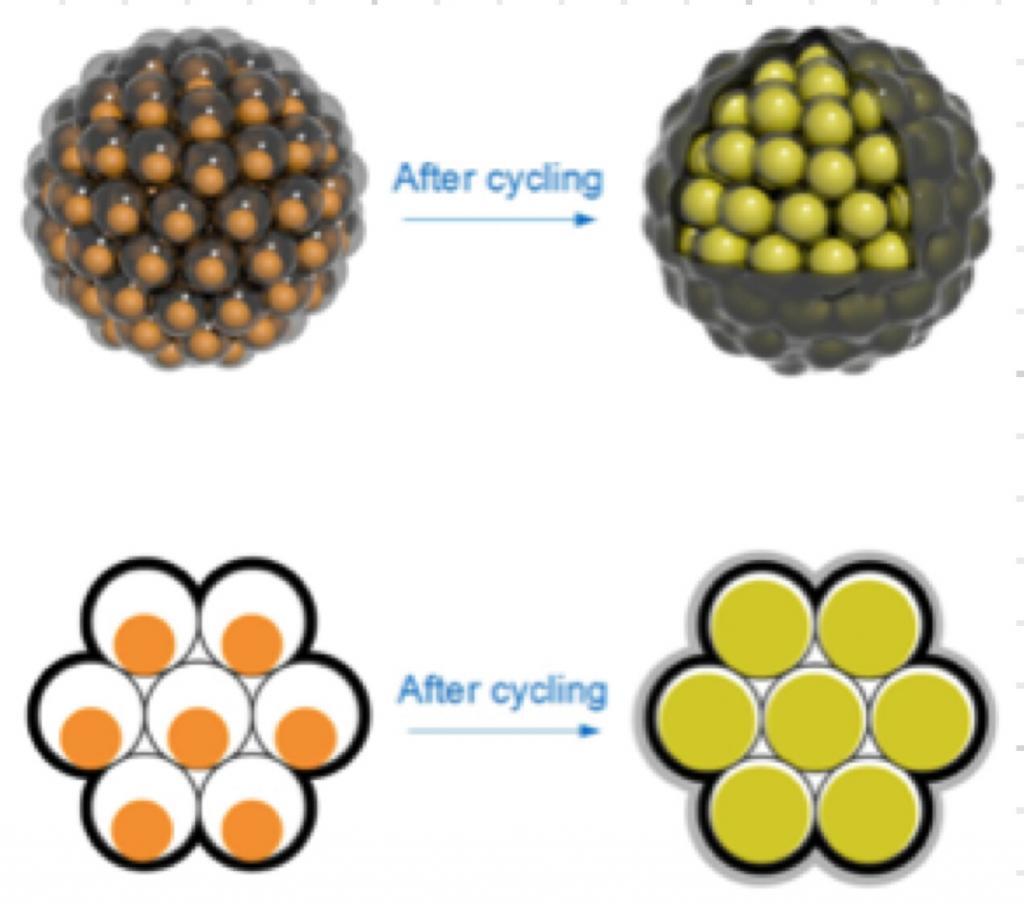 The clusters, too small to see with the naked eye (see below for electron microscope images), form a fine black powder that is then coated onto a piece of foil to create the anode. By carefully adjusting the size of the clusters, the charge density can be optimized while minimising the gunk.

As anybody with an old laptop battery knows, the capacity of a battery to hold charge decreases with use. Commercial Li-ion batteries with typical usage, for example, lose about 20% of their capacity after 1000 such cycles. In comparison, the new battery claims only a 3% loss in capacity after 1000 charge-discharge cycles.

In addition to improving battery lifetime, the new technology also promises lower costs for two reasons: (a) The micro-emulsion process used to create the carbon coating on the silicon particles is a commercial process typically used in the oil and paint industries, and (b) Although raw graphite and raw silicon both cost about the same today (about $1,400/ton), silicon is a more abundantly available material and offers lower material costs in the long run.

Cui has already set his sights on reducing cost and aims to further simplifying the production process. In addition, his team aims to explore cheaper ways to make silicon nano-particles. One particular approach, which the researchers have already reported in other publications, is transforming rice husk into silicon nano-particles (rice husk is an agricultural waste produced in large quantities and is 20% silicon dioxide).

“While a couple of challenges remain, this design brings us closer to using silicon anodes in smaller, lighter and more powerful batteries,” says Cui. “To me it’s very exciting to see how much progress we’ve made in the last seven or eight years, and how we have solved the problems one by one,” he adds, sharing his hope – a sentiment that the renewables industry, no doubt, has in common with him.