While many contend that lithium-ion (Li-ion) batteries may be replaced with other, more promising battery technologies in the long run, incremental improvements continue to keep Li-ion relevant with promises of better, safer and cheaper Li-ion batteries in the future.

One such recent Li-ion innovation comes from the US Argonne National Laboratory and FMC Lithium, who have jointly developed a novel suite of materials to enable the use of Stabilized Lithium Metal Powder (SLMP), which has the potential to make lithium ion batteries safer and cheaper.

Typical electrodes in lithium-ion batteries are made using lithium powder, which is slurry processed with binders and solvents so that it can be incorporated into the electrodes of the battery. Once activated, the lithium particles act as the source of lithium-ions, which shuttle between the 2 electrodes as the cell is charged and discharged.

In response to this, FMC Lithium – a subsidiary of American chemical company, FMC – developed Stabilized Lithium Metal Powder (SLMP) in 2004. SLMP consists of extremely fine lithium powder particles coated with a protective layer to stabilise it (pictured below). Although the resulting material is safe enough to handle in a dry room manufacturing environment, it is not compatible with conventional binder and solvent materials, which are crucial to manufacturing long-lasting and high performance electrodes. 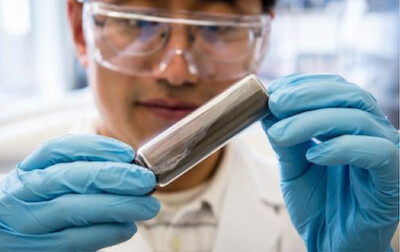 In response, a team of Argonne chemists led by John Zhang developed a novel polymer binder and solvent system, which demonstrated excellent compatibility with SLMP. The new polymer binder/solvent combination is slurry-compatible and enables optimum use of the lithium as the SLMP is evenly distributed within the electrode. Argonne researchers have also developed a new, simple compression-based method to activate the SLMP, which has the potential to greatly reduce Li-ion battery manufacturing costs.

The cutting-edge R&D led to Zhang and his colleagues being awarded FMC’s prestigious Scientific Achievement Award. Argonne Labs is currently in the process of patenting the new binder/solvent combination and the SLMP activation method, which will add to the wide range of patents the research institute already holds in the battery cathode technology space and which it actively licenses to the industry including to big players such as GM, LG Chemicals and BASF.

Underlining the catalytic role of research institutes like Argonne, Zhang says, “Our fundamental research on the SLMP technology and development of new methods to apply the lithium metal product into high-energy Li-ion batteries for electric vehicles is an example of how national laboratories can aid U.S. companies to increase their competitive advantage in the global marketplace.”

The close involvement of a lithium specialists FMC also bodes well for the future of Li-ion technology and for SLMP, which promises to deliver greater energy densities, extended cycle-life and reduced manufacturing costs. And if Argonne Labs’ success at developing and commercialising battery technologies is any indicator, there is a good chance SLMP will eventually find its way into actual devices and continue to keep Li-ion battery technology competitive.