An icky-sticky wad of chewing gum under your shoe is definitely annoying, but what makes gum sticky may soon keep your laptop or grid storage battery from exploding.

Researchers at Washington State University have created a new class of gum-like electrolyte materials that they claim can greatly improve the safety of Li-ion batteries without compromising performance.

Although ubiquitous, the electrolytes used in most Li-ion batteries are made of a highly corrosive and flammable liquid electrolyte, which require careful electronic control to prevent the batteries from overcharging and short-circuits, both of which can lead to the batteries exploding. Early criticism led battery makers to use flame retardants and temperature sensors to mitigate such risks and even today, Li-ion batteries are made to undergo more rigorous reliability testing compared to lead-acid and other battery types. However, as Washington State University Professor Katie Zhong (pictured above) says, such approaches don’t “solve the safety problem fundamentally.”

Attempts have been made to substitute the liquid electrolyte with solid alternatives (such as in lithium-polymer batteries); however, such batteries tend to have lower energy densities (requiring larger batteries to store the same amount of energy) and shorter life-spans (electrical connection between the battery components is harder to maintain).

To combine the best of both worlds, Prof. Zhong and her team have developed a gum-like material that consists of a liquid electrolyte suspended in a matrix of solid wax or wax-like particles. While the liquid electrolyte guarantees high energy densities (better conduction), the gum sticks to the rest of the cell components (the anode and cathode) and forms reliable contacts. In case the cell becomes too hot, the wax particles melt and form a protective film, effectively shutting down the battery without the need for temperature sensors (see graphic below). 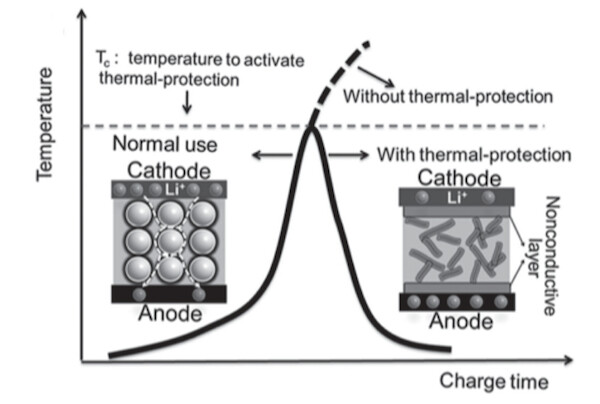 An additional benefit of the light-weight and pliable gum-like electrolyte is that the batteries can be used in applications like flexible electronics as they can survive being twisted and stretched (or smashed in the case of electric cars), with no impact on the safety or performance.

More importantly from a market perspective, the gum-like electrolyte can directly replace existing liquid electrolytes and be easily incorporated into existing battery designs. With a patent application already in the works, the group hopes to make full use of this advantage and will begin testing their electrolyte in real batteries soon.

If recent forecasts by Navigant Research hold true, the future of energy storage will be a diverse one as far as battery technologies go. And if such innovations are found to be cost effective in production, Li-ion may just keep chewing its way up to being the dominant battery technology of the future.