The Abbott government and federal Labor have finally struck a bipartisan agreement on Australia’s renewable energy target, with both parties agreeing to slash it from 41,000GWh to 33,000GWh by 2020.

The agreement was reached on Monday morning after a reported intervention from the Prime Minister’s office, encouraging the Coalition to backflip on its backflip about the need for ongoing reviews.

The deal, struck in Melbourne between Industry minister Ian Macfarlane, environment minister Greg Hunt, and Labor’s Mark Butler, will reduce the amount of large-scale renewable energy to be built between now and 2020 by more than one-third – from around 8,500MW to 5,500MW.

It means that Australia becomes the first developed country to formally reduce its renewable energy target, adding to its decision to become the first to kill a carbon price.

The Coalition government says a 41,000GWh would mean renewables would account for more than 27 per cent of total demand, although it has never explained why this is a bad thing. Its own Warburton review, and others, found that consumers would benefit.

The only beneficiaries of a reduced target are incumbent coal- and gas-fired generators mostly, but the deal – and the locking in of the target until 2018 – will finally give the certainty the industry needs to sign contracts and obtain financing to bring projects to market.

It seems that the deal was done after the Clean Energy Regulator managed to make it clear to those within the Prime Minister’s office that the idea that the “penalty price” would inflict untold pain on consumers – a constant refrain of Macfarlane and Hunt – was inaccurate, even in the unlikely event that the industry could not meet the much reduced target.

“It has been a tough 15 months, but this development will be a huge weight off the shoulders of the 20,000 people working in the industry. It will also help to unlock Australia’s massive renewable energy potential.”

Thornton said the industry was “obviously disappointed” with a reduction of the target.

“We remain concerned about the impact of this lower target on the opportunity for emerging technologies like large-scale solar, and will continue to work with both major parties on appropriate policy measures to address this.”

This is recognition of the major complaint of the solar industry, particularly those not within the CEC, that large scale solar would be the principal victim of this reduced target, a strange outcome for a Coalition government nominally in support of solar technologies but not a big fan of wind energy. 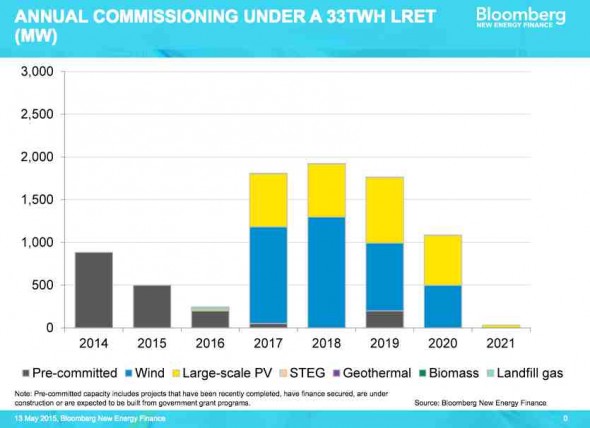 Still, many think that large-scale solar is not dead in the water. As we reported last week, Bloomberg New Energy Finance thinks that one third of the new build over the next five years could come from large scale solar, mostly in Queensland where the market for energy will increase because of the energy hungry LNG sector.

Some say this is an optimistic and highly conditional outcome. But developers are confident they will get their projects up, while others point to the W.A. market, and others still to the emerging corporate market, and demand for smaller solar systems, particularly from councils such as Sunshine Coast, Fremantle, and now Wanneroo.

Claire O’Rourke, from Solar Citizens, a group representing solar households, said the decision to slash the RET will compromise Australia taking its proper place at the leading edge of the global boom in solar and renewable energy.

She said it was disingenuous for the Liberal government to claim the diminished Target would ‘protect’ electricity consumers when its own Warburton report showed having more solar and renewables in the network would have reduced power costs for all households – whether they have rooftop solar installed or not.