The Australian Electricity Market Operator (AEMO), has released a draft version (pdf) of a study it is currently undertaking that investigates the possibility of an Australia that runs wholly on renewable energy. The draft report shows the results of several scenarios modelling future energy mixes; in all of them, solar photovoltaic (PV) systems play a significant role.

AEMO was required by the federal government to include 3 things in the report: 1) Scenarios for a 100% renewable energy supply at the years 2030 and 2050, 2) the generation plants and transmission infrastructure that would be necessary in each scenario, and 3) the estimated capital cost requirements for each of the scenarios.

Unsurprisingly for sun-blessed Australia, wind power and 3 forms of solar power–rooftop PV (residential & commercial), utility-scale PV, and concentrating solar thermal (CST)–feature heavily in each scenario. Although the report is in draft form and as such may undergo changes before reaching completion, the contribution of rooftop PV to the mix is unlikely to diminish greatly from the draft version of the report. Indeed, in all scenarios, solar PV and energy demand management tactics are seen as reducing or shifting the time of peak electricity demand–possibly even resulting in a ‘winter peaking’ grid, a stark contrast to the summertime, air conditioner-driven peaks that are currently the norm. 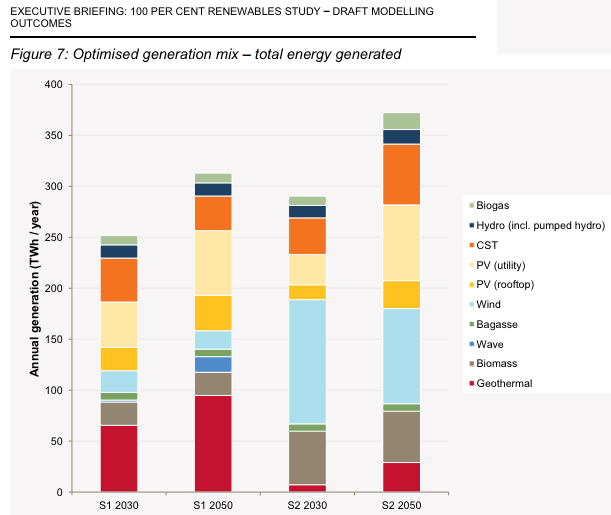 The total cost of a transition away from the fossil fuel-dependent status quo to a totally ‘clean’ energy generation system is estimated in the draft paper to be between $219 and $332 billion, although–with inevitable learning curves–likely to be higher in reality. Additionally, the paper points out that these estimated costs incorporate only the cost of technology and hardware but exclude land acquisition requirements (an estimated 5,000km), distribution infrastructure upgrades, and liabilities pertaining to stranded assets–all of which, it notes, could be substantial.

It is impossible to determine how this estimated $332 price tag (comparatively speaking, not a huge amount if stretched over 20 or 30 years) would stack up against a business-as-usual electricity generation scenario calculated using the same methodology, however, due to the fact that none was required to be modelled for the report. This makes it difficult to determine whether the 100% renewables route or the current course would be the more cost effective one, or what sort of a price difference might lie between them.

Other organisations have also tried their hands at developing 100% renewable energy scenarios for Australia. Beyond Zero Emissions caused the biggest stir with its Stationary Energy Plan, which details how Australia’s electricity demand could potentially be met by all renewable sources and energy reduction–as early as 2020. A team from the University of New South Wales has more recently produced its own study (pdf) demonstrating how demand could be met by renewables by 2030–at only marginally greater cost than business as usual with a low or no carbon price, or at the same cost with a moderate carbon price.

Understandably, the compilers of the report are careful to hedge that there are a lot of unknowns both within and beyond all of the modelled scenarios–especially when it comes to the cost of technologies. Nevertheless, even if Australia does not reach 100%  renewable energy by 2030 or 2050, the basic conclusions of AEMO’s report corroborate the idea that solar PV has become–irreversibly–a force in Australian electricity generation. Also backing this up is the news that Australia has recently passed the symbolic milestone of 1 million solar homes, another indication of the huge popularity of rooftop solar in the country as a means of cutting electricity bills.