The implementation and ongoing review of feed-in-tariff laws in Germany over the last 19 years has been hugely successful in encouraging solar PV installations.

Feed-in-Tariff laws place an obligation on energy companies to purchase electricity from renewable sources at a premium price. In Germany the national gross feed-in-tariff provides access to the grid, a set price per kWh and is guaranteed for 20 years. This makes solar and other renewable energy investments secure for producers, manufacturers, investors and suppliers.

Benefits of a well designed feed-in-law include:

The German government began offering incentives for renewable electricity generation in 1991 with the introduction of the Electricity Feed Act. This scheme was enhanced in 2000 with the adoption of the Erneuerbare Energien Gesetz (EEG) which was highly influential in driving a 9 fold increase in solar PV installations over the next 5 years. It was so successful that in 2005 around 10% of Germany’s electricity was generated by renewable sources. 70% of these installations were directly supported by the feed-in-tariff.

A more updated and refined FiT scheme was enshrined in law with the introduction of an amended EEG in 2004. The amended scheme committed Germany to increasing electricity supplied by renewable energy sources to 12.5% by 2010 and to at least 20% by 2020. It also contained updated measures to promote this growth. New installations post 2003 would now receive lower tariffs in the following years to aid rapid development. This tariff ‘degression’ provides additional incentives for manufacturers to reduce production costs and improve solar panel efficiency. In addition tariffs would be paid based on the yield and generation costs associated with each type of renewable technology. This meant that different tariffs were scientifically assessed and introduced for solar, wind, biogas, hydroelectric and geothermal energy.

More recently, concern about the huge growth in German renewable energy production has prompted a Government FiT review. Electricity from renewable sources currently constitutes 15% of Germany’s overall production with around 2% of this coming from solar PV. All electricity consumers pay an extra charge on their bills to help finance small scale solar and other renewable power sources. Further exponential increases in installed PV capacity mean electricity prices will be driven skyward. 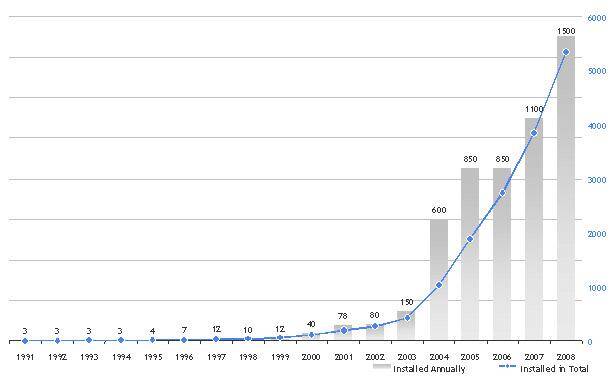 A delicate policy balancing act is currently taking place between encouraging solar investments and increasing electricity costs for consumers. Mindful of the political ramifications of high energy bills, the government began by cutting solar FiTs by 5 % annually and increased this last year to around 10% (depending on the type of installation). On March 3 this year the federal government agreed to cut solar feed-in-tariffs for installations on buildings by 16%, and for other free-standing installations by 15% from July 1 2010. If additional capacity thresholds are reached each year then these cuts would increase commensurately.

If these changes are adopted into legislation by the Bundestag then German solar subsidies will be as follows.

Despite these changes, SolarWorld CEO Frank Asbeck predicts that lower prices for PV modules will result in further growth in the German solar PV market from 3GW to between 4 and 5GW in 2010. The global market of 7.3GW is set to grow by a further 30% to around 10GW this year. If these predictions are correct Germany will have almost half of the world’s installed solar PV capacity by the end of the year.

As the most developed market in the world, important lessons and guidance are provided by the German solar experience. Australia still lags far behind Germany with an estimated 115MW (0.115GW) of installed capacity in mid-2009.  It is therefore realistic to assume that FiT degression will not be at the same pace as Germany for quite some time.