Toshiba Corporation recently announced an order for its innovative SCiB batteries for a large-scale renewables/storage project on remote islands in Japan.

The systems were installed by Kyushu Electric Power Co. on two islands in Japan’s Kagoshima prefecture: Tanegashima and Amamioshima and are intended to be a demonstration project to expand introduction of renewable energy sources on remote islands. The demonstration program is expected to run for three years.

The SCiB lithium-titanate batteries deployed at the sub-station level (pictured below) will be used to exhibit the capabilities of battery energy storage systems and to develop optimal control strategies to regulate grid frequency and maintain stable power supply. 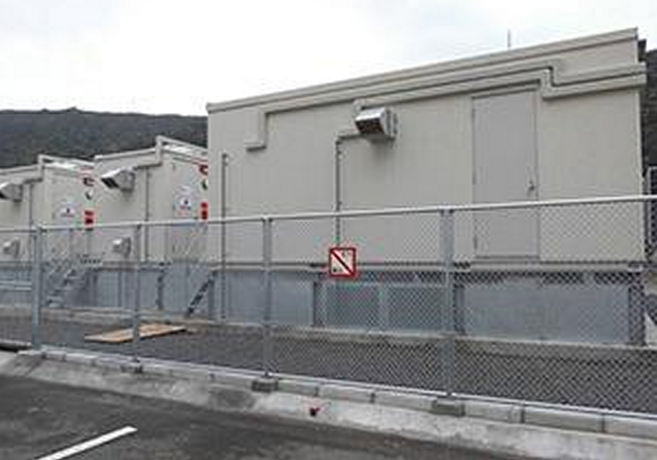 Remote islands around the world heavily rely on fuel imports for their energy needs and are increasingly turning towards renewable energy sources to become energy independent. For example, developers of an upcoming solar project in Guam, have reported that their 25 MW solar system could save over USD $300 million on fuel costs for the island, which heavily relies on fuel oil and diesel for its 552.2 MW of gross generation capacity.

However, when large-scale renewable energy sources such as wind and solar are integrated into power grids on remote islands, power frequencies and power quality in the grid tends to fluctuate due to the intermittent power outputs from the renewables.

Although this is a problem common to all grids, it is particularly troublesome for island grids, which tend to be smaller and more isolated, which means they are more severely affected by the fluctuating output. Energy storage is thus critical to ensure the stability of a renewable in such locations.

In this case, Toshiba has decided to use its long-life SCiB batteries as the storage medium. SCiBs are essentially lithium-titanate batteries, in which the graphite anode typically found in lithium-ion batteries is replaced with titanium oxide, a more durable anode material. The resulting improvement in performance and a long-life of up to 10,000 charge-discharge cycles ensures rapid charging and discharging, high reliability and better operational safety – key features for any grid-connected storage project.

Further, the systems delivered by Toshiba are on a scale not often seen for such projects. The systems on the two Japanese islands have a maximum power output of 2,000 and 3,000 kW, with storage capacities to the tune of 774 kWh and 1,161kWh for Tanegashima Island Amamioshima Island respectively.

Such large scale demonstration projects will be key to proving the cost and performance benefits not just for remote islands but also for larger grids. As more data from the project becomes available, one hopes it will convince more countries around the globe to jump on the distributed generation/storage bandwagon.