Thanks to a change in Solar Choice database functionality, figures from a larger number of installers than usual was used in calculating solar PV system installation prices for September 2013. As a result, average prices appear higher in most of the cities and solar system sizes included in the index, while ‘low’ prices remain largely unchanged. Also new from this month, we have expanded our ‘Hobart’ price category to encompass all regions of Tasmania.

All Australian capital cities besides Darwin are incorporated in the PV Price Index. The table below lists average solar system costs for each of these cities. As usual, solar system offerings in Sydney and Perth have the lowest average prices.

Although tables last month gave the impression that Hobart/Tasmania was home to the least expensive systems, this anomaly has been cleared up with the incorporation of a larger number of installers. In a return to the status quo, systems in Melbourne and Tasmania are again on average the most expensive this month, as one would expect to be the case given the smaller federal discount that they are entitled to compared to the other cities.

The following table shows STC-inclusive installation prices for 1.5kW, 2kW, 3kW, 4kW and 5kW solar systems. When included in installer pricing data, STCs accounted for a discount of about 68c per watt for the Zone 3 cities (Sydney, Perth, Adelaide, and Brisbane). The discount was about 60c/W for  Melbourne/Zone 4. No STC discount figures were available in the data from Tasmania installers this month. Average prices have increased almost universally across system sizes and cities, due mainly to the inclusion of installers hitherto not incorporated into the calculations. Meanwhile, Sydney and Perth prices saw little significant change. As always, 4kW and 5kW systems offer the best value for money, despite the fact that average prices for systems of these sizes increased compared to last month. 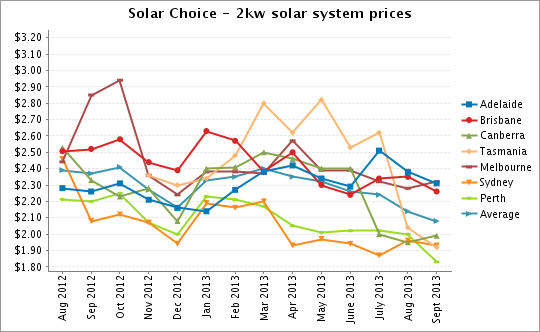 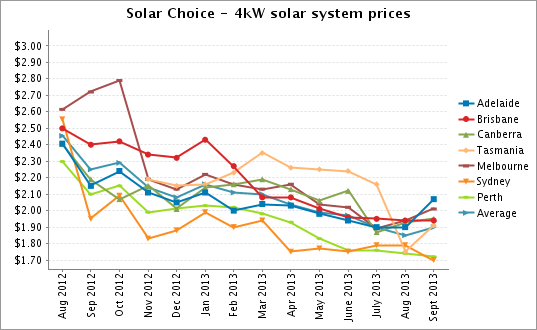 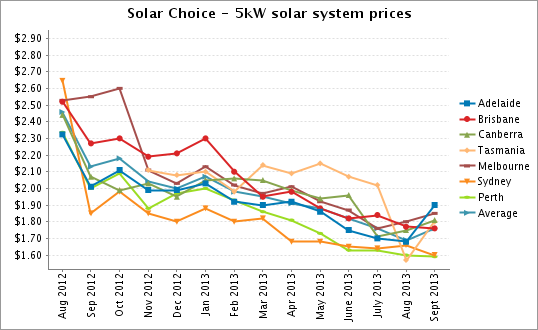