Not every solar PV system owner need be concerned about whether their panels can withstand extended exposure to ammonia; for most, the issue would not be a consideration. But for anyone working in agriculture–especially livestock farming–this matter is likely to be of great importance.

Ammonia, a by-product of decomposing excrement, is ubiquitous where livestock and their waste are present. Its corrosive properties are well known–roofs, gutters and numerous other metal components of buildings are potentially susceptible to its effects if not specifically designed or treated to withstand them.

The same is true for solar PV modules which, like roofs, are effectively building elements intended to remain in place for long durations–25+ years by warranty. In recognition of this fact, a number of bodies have designed standards and associated testing protocol to prove the durability of solar panels in the presence of ammonia over time.

In an thorough piece penned back in 2011, PV Magazine looked into a number of the standards that have been developed to address the need for assurance with regard to ammonia corrosion resistance in solar panels. The tests all involve subjecting the panels in question (those being tested) to prolonged exposure to ammonia and humidity in a controlled environment in an effort to simulate the real-life conditions they may be placed in.

The variables that differ between testing methods are temperature, duration, concentration of ammonia, humidity level and climate (which is either constant or goes through cycles). The tests and organisations that devised/provide them are listed in the table below. 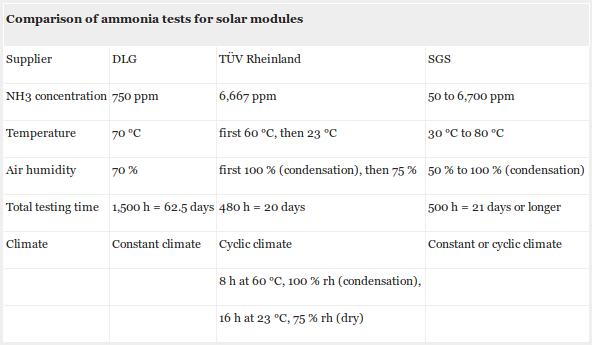 Certification through TUV Rheinland, who announced their corrosion test in 2011 (along with a salt-mist corrosion test), is probably the most commonplace among products sold in Australia. A wide range of solar modules on offer in the country have undertaken testing through TUV, which is one of the most prominent testing body for PV module certification globally. These include but are not limited to Canadian Solar, Jinko Solar and Trina Solar.

Winaico Solar is among those who received ammonia certification through DLG. Certifications through SGS, while not as common as those from TUV or DLG, can nevertheless be found on occasion. The ranks of the SGS-certified in Australia include SolarWorld and Aleo Solar.