The Clean Energy Regulator (CER) has released data indicating that the number of rooftop solar systems in Australia is now approximately 170,000 short of 2 million when both solar photovoltaic (PV) systems as well as solar hot water systems are counted. The CER also notes that when all other types of small-scale generation units (or SGUs, as they are known in Renewable Energy Target parlance) of renewable energy are included, the figure jumps to just over 2 million.

Of all of the SGUs commissioned since the RET began, however, rooftop solar PV systems are by far the most popular and numerous, at around 1,160,000 after having surpassed the 1 million mark earlier in 2013. Solar hot water systems come in a far second place at around 670,000 units. These ‘other’ technologies include micro-hydro & wind generators (totaling only about 400 together) and air source heat pumps, of which there are around 173,000 currently in operation.

The CER says that the figures are evidence that the country’s Renewable Energy Target (RET), which is the primary support scheme for renewable energy in Australia, is effectively fulfilling its purpose of promoting uptake of renewable energy systems. The RET provides what are in effect up-front discounts on small-scale renewables, reducing the cost of solar PV systems, for example, to the tune of about $0.60 per watt in most regions of the country.

Collectively, the SGUs currently in operation generate (in the case of solar PV, wind and hydro) or displace (in the case of solar hot water & heat pumps) over 6,800 gigawatt-hours (GWh) of electricity annually, according to the CER. This, they say, is enough electricity to power 1 million Australian households–or all of the homes in Perth, Hobart, Darwin and Canberra combined.

According to the CER’s data, post code area 4670 (near Bundaberg, QLD), with 7,881 units, currently has has the largest total number of SGU installations in the country. Post code 6210 in Mandurah, WA currently comes in second, with 7,308 units. Of the top 10 post codes with regard to total installed SGU capacity, 9 were located Queensland, with the remaining 1 in Western Australia. 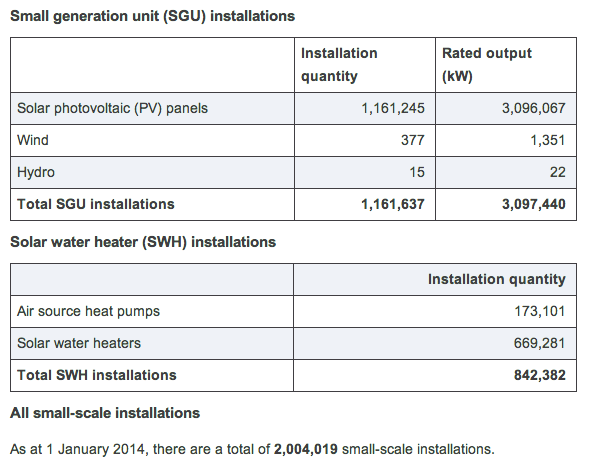 Table via the Clean Energy Regulator.