An ambitious project showcasing the potential of solar PV has just come to a close. Pulling into Monaco on 4 May 2012, MS Turanor PlanetSolar catamaran has become the first vehicle to complete an around-the-world trip relying only on the power of the sun. 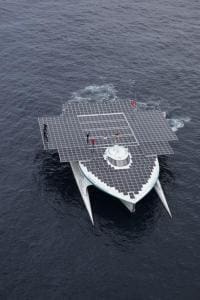 PlanetSolar arrives in Monaco. (Click to enlarge. Image via PlanetSolar.org.)

PlanetSolar’s historic journey, taking over a year and a half (584 days, to be exact), was obviously not an attempt to show demonstrate the potential speed of a solar-powered boat, but required nothing in the way of fuel. Instead, the vessel was designed with a cumulative total of 93.5 kilowatts (kW) of on-deck solar panels serving in the place of conventional propellant. The trip, which began and ended in Monaco, led the 4-person crew across the Atlantic, between the Americas, to the east coast of Australia, through Southeast Asia, past the tip of India, and between Africa and the Middle East at the gulf of Iman. To learn more about PlanetSolar’s voyage and vision, visit PlanetSolar.org.