Disconnecting from gas and choosing to live in all-electric, solar powered homes could save Australian households thousands of dollars in energy costs, a new study has found.

The report, published by the Alternative Technology Association, puts a question mark over the use of gas power in homes in almost every major city of Australia, and categorically rules it out as uneconomic in new-build homes anywhere in the country.

The research found that new home buyers would be in the order of $9,000 to $18,000 better off over 10 years by choosing an all-electric home with a 5kW solar PV system, compared to establishing that home as dual fuel – electricity and gas – without solar. 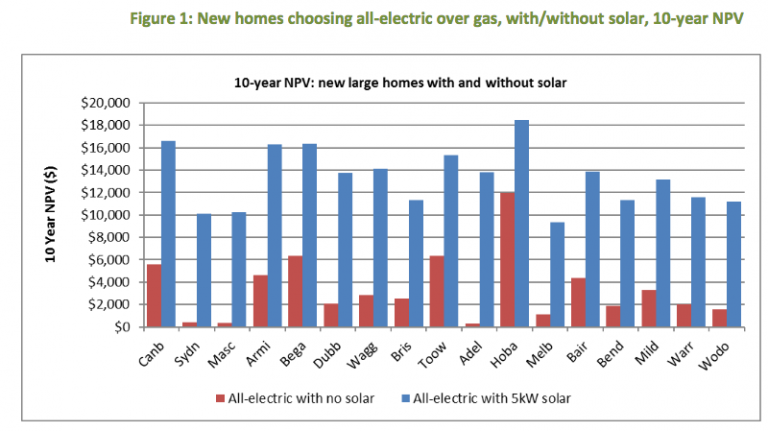 The lowest return on that equation was found in Melbourne homes, thanks to the lower value of solar PV and “relatively low gas tariffs,” the report said.

But even in Melbourne, a new home owner would be almost $10,000 in front after 10 years, after establishing a gas-free, solar all-electric home.

“There is just no reason economically for new homes to be built with both electricity and gas,” said Dean Lombard, a co-author of the Household Fuel Choice in the NEM report and energy analyst at the ATA.

“This has been the case for many years in Australia’s north, but it’s now also clearly the case in colder climates like Victoria and Tasmania. Heat pump hot water and split system air-conditioning systems are just far more efficient than gas appliances and solar systems are cheaper than ever.”

The report, which was commissioned by Energy Consumers Australia, calls on new home buyers as well as the building and energy industries to be educated on the value of all-electric, solar-based homes.

It also recommends a review of policies and programs that subsidise or support the expansion of gas networks around Australia.