Australia’s rooftop solar market is continuing to grow, despite a plunge in renewable energy investment that is driving the nation’s large-scale renewables sector into a deepening crisis.

New analysis by Bloomberg New Energy Finance points to a 90 per cent drop in renewable energy investment in the 12 months to March 31, thanks to policy uncertainty under the Abbott government.

Of that $206.9 million, $160 million came from government agencies – such as the Australian Renewable Energy Agency and the Clean Energy Finance Corporation – that the Coalition government is trying to scrap.

Without that support, investment would have been virtually zero. The one project to get financed in the latest quarter was for a unique floating solar pilot project in South Australia.

BNEF says the dramatic drop is almost entirely due to the policy uncertainty brought about by the election of the Abbott Coalition government, and attempts by key members to firstly scrap, and now severely cut the previously bipartisan target of 41,000GWh by 2020.

The Clean Energy Council, supported by Labor and key industry groups, has proposed a compromise of 33,500GWh, but so far the Abbott government has refused to budge from its position of 32,000GWh. Industry minister Ian Macfarlane has indicated that even that figure is too high for many in Cabinet.

This followed zero investment in large scale projects in the previous quarter. BNEF noted the exit of Banco Santander, the world’s third largest clean energy lender, from the Australian market, as reported by RenewEconomy here.

In contrast, the uptake of rooftop PV by households and businesses has been largely unaffected, with about 195MW of  rooftop PV capacity in the sub-100kW category installed in the first quarter, a 7 per cent increase on the same quarter a year ago. 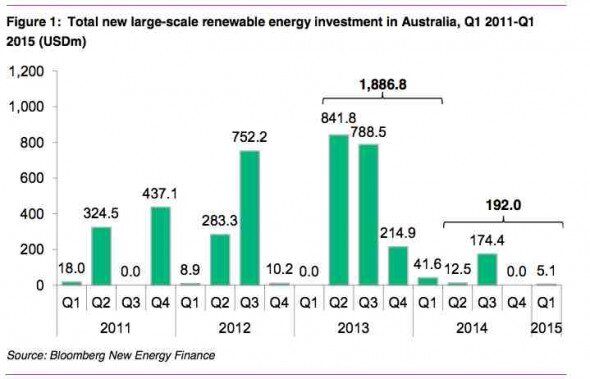 The data came as new figures from the Australian Bureau of Statistics on Monday showed the number of renewable energy jobs in Australia had fallen by 2,300 or 15 per cent up to June 30, 2014 – not including the latest downturn.