Imagine being able to drive yourself around town without having to pay for an ounce of petrol – but instead getting all the fuel that you need for free from the sky. This is the dream that a dedicated group of UNSW students are turning into a reality following three years of hard (and almost entirely unpaid) work. The resultant car – called eVe – is the Sunswift collective’s sleekest, fastest and most recent model in five generations and twenty years of volunteer effort. eVe, which set an FIA speed record just last year, is set to be certified road-legal in the next month, and will be on a PR touring circuit to celebrate. Sunswift’s solar-powered racer, eVe, prior to makeover. (Image via Sunswift.)

Sunswift’s eVe (‘V’ standing for 5 – the fifth Sunswift car) does not differ significantly in basic form from a run-of-the-mill, roadworthy automobile: It has four wheels and is roughly the same size and shape. But eVe is substantially lighter than a petrol-powered car – thanks in part to not having a fuel tank. Instead, the two-seater runs on 800 watts of highly efficient SunPower solar cells distributed across its exterior, allowing it to run at a maximum speed of 140km/hr. A 16kWh battery bank gives eVe a maximum range of up to 800km – about four times more than the 160-200km of many of the all-electric vehicles currently on the market. Running on batteries alone – without being able to use the sun to charge while driving – eVe can run for up to 500km. Driving at under 60km/h, eVe can keep going for as long as the sun is shining.

eVe is quite a bit different from its four predecessors, all of which were designed primarily with speed in mind for competition in the 2-yearly World Solar Challenge – a grueling 3,000km trek from Darwin to Adelaide in vehicles powered by nothing but the sun’s rays. Most significantly, eVe, at a hefty 320kg, bucks the general weight-loss trend that the first Sunswift cars have followed: the Sunswift I, II and III weighed in at 225kg, 220kG and 200kG, respectively. The following addition to the Sunswift fleet – a three-wheeler named IVy – was a diminutive 165kG. Some of the weight gain is due to changes in the car’s overall rideability: eVe is the first in the Sunswift family that can carry a passenger in comfort or have any kind of storage space. 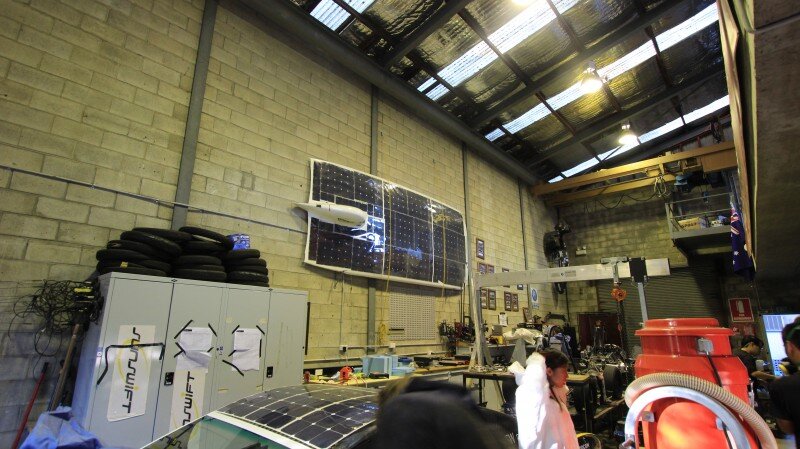 eVe’s predecessor – IVy – sits affixed to the wall at the Sunswift workshop.

In order to reach the road-worthy milestone, eVe is currently being redesigned to comply with the performance, comfort and safety standards which ordinary vehicles must meet. The improvements include upgrades to the car’s suspension system, added side-impact protection, and new battery charging and braking systems. eVe will also get a few bits that most drivers take for granted: windscreen wipers, headlights and dehumidifiers – none of which was particularly high priority in the desert racing conditions for which the car was originally created. 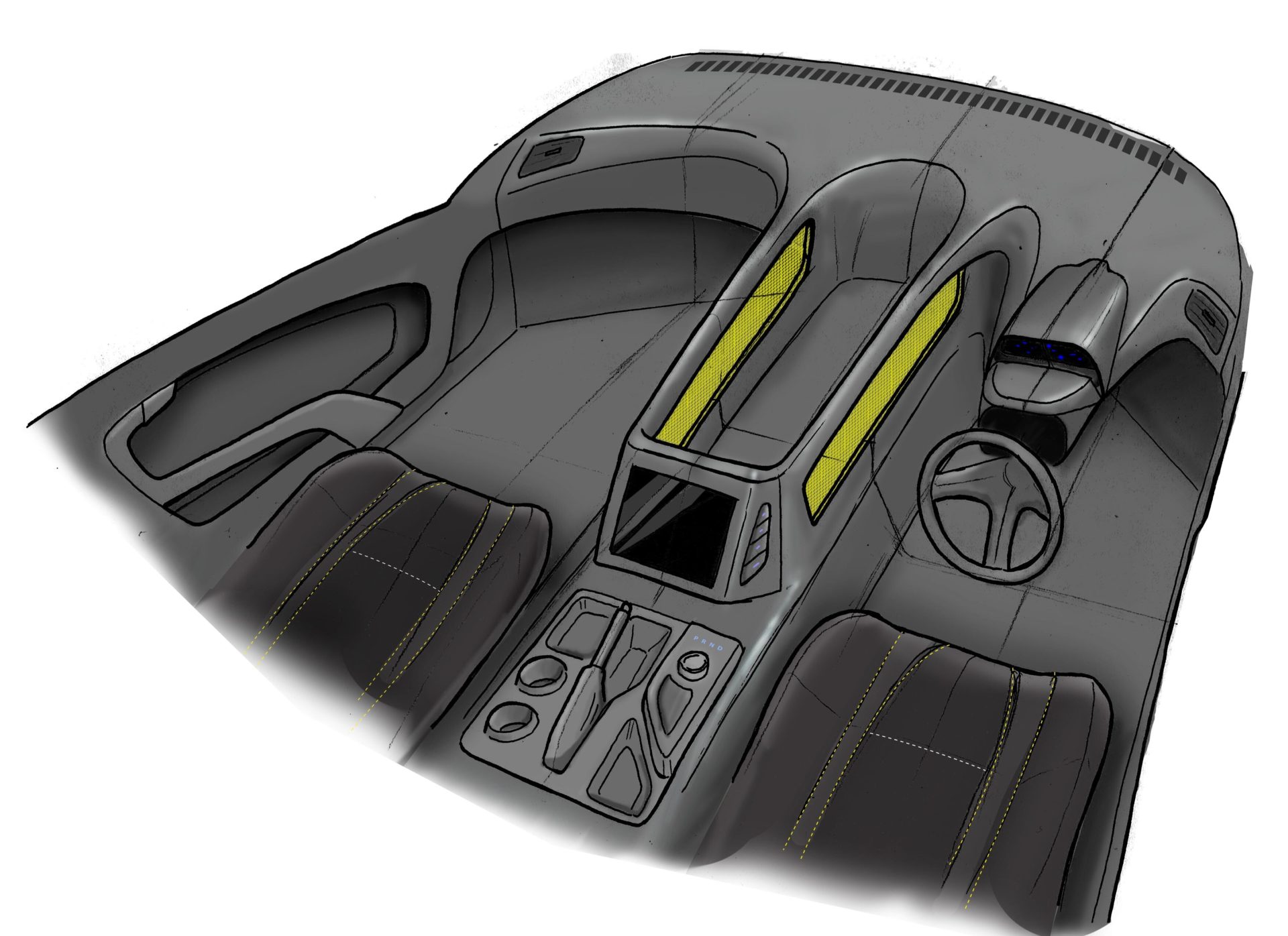 eVe’s redesigned interior will seat two and have storage space. (Image via Sunswift.)

Despite the addition of these creature comforts – and weight – to their car, the Sunswift team says they will be racing to win in this year’s WSC 15-18 October this year. Asked how the team hopes to achieve both road legality as well as take away a prize in the WSC, Sunswift Business Head Rob Ireland responded that the team will have a few tricks up its sleeve. “Our car relies on its ultra-light weight and aerodynamic profile to reach high speeds. Rebuilding the car will add over 100kg, however for the WSC we will be re-engineering our car even further to reduce weight.” 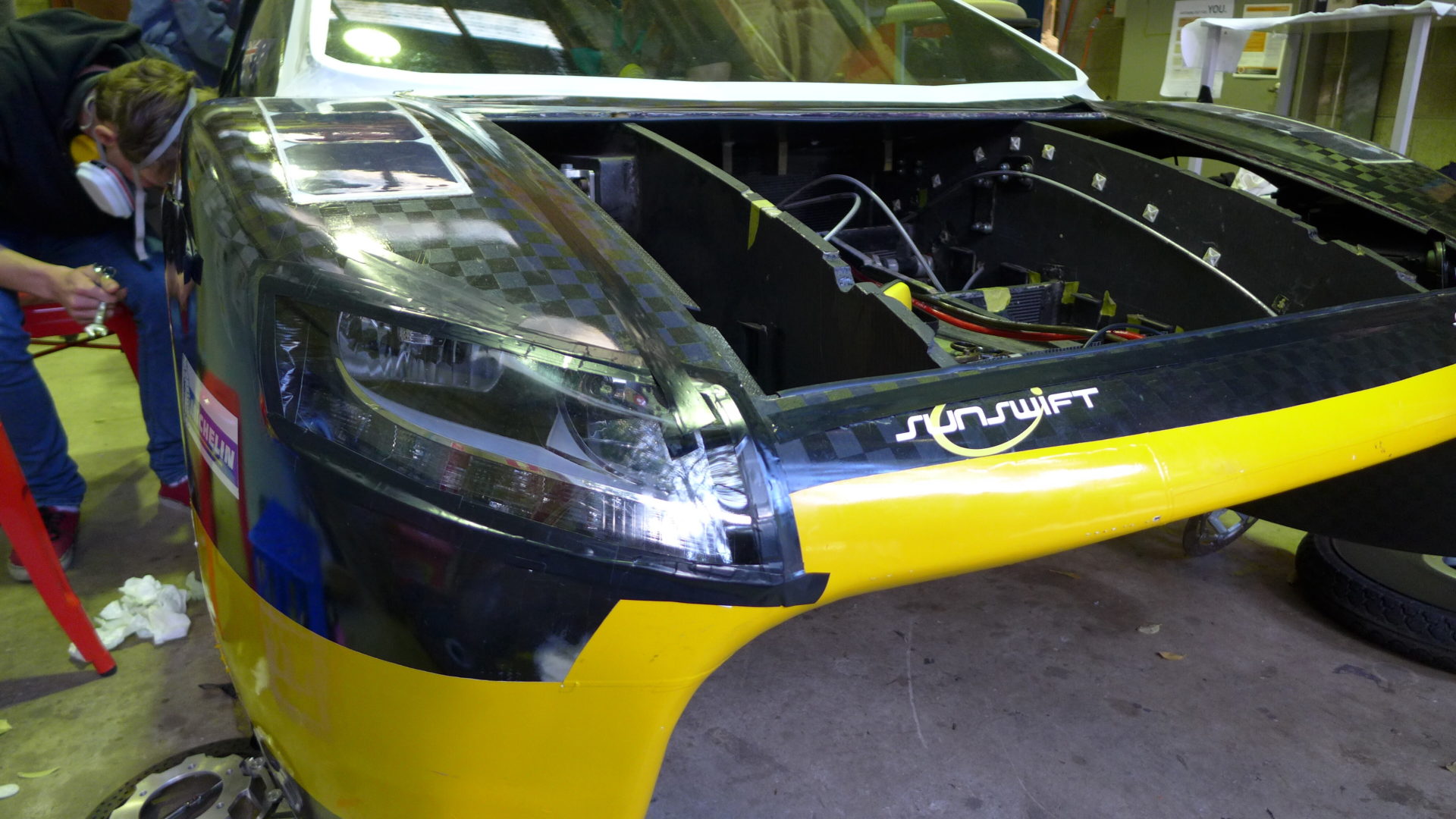 Sunswift’s eVe, currently undergoing a makeover to meet standards for road-legality. The newly inserted headlights were provided by Audi.

The big question: Can the solar-powered car be commercialised? And if so, when?

Hearing eVe’s story, it’s difficult not to pick up echoes of Tesla Motors. Not only are both in the process of developing some of the most innovative and exciting private transport options in the world – they both also have a knack for creating a media buzz without advertising. But despite all the generosity of their sponsors – without whom none of Sunswift’s cars would exist – Sunswift has nowhere near the billions in capital funds available to them that Tesla does, so it’s safe to say that commercialisation is still some way off.

“All 4 previous models of eVe were not practical solar cars. They were purpose built, 1-seaters that relied solely on solar power,” said Mr Ireland. “Though it would be possible to engineer a flat, 1-seater road-legal solar car it would not have as much significance, as people would not see themselves driving one. eVe was built to be a practical solar car that you would want to drive, so road legality at this stage represents the next leap in the direction of commercialisation.” The team doesn’t expect that they themselves will get eVe (or a later model) to the point where you can walk into your local Sunswift dealership and buy one, but Mr Ireland says that Sunswift “would be honoured if our work helps contribute to solar cars being mass-produced.”

Another parallel with Tesla Motors would be pricing. “We’ve been told that the car as it stands would cater only to the excessively wealthy,” says Mr Ireland. To date, eVe has cost about $500,000 to build – not including labor and pro bono expertise from various industries. There are a few reasons for this, he says. Firstly, the cost of both carbon (eVe’s body is made of carbon fiber) and high-efficiency solar cells would need to come down further. But more importantly, there would be the need for multiple versions of eVe to first be produced only to be demolished in crash testing – not to mention other testing and modifications. And even though the estimated retail cost would be reduced by over 50% if the car were to go into production, over $200,000 is still a pretty penny that few would be willing – or able – to pay.

Asked about a rough time frame for commercialisation, Mr Ireland couldn’t offer comment directly about Sunswift or eVe, but did hint at some of the other challenges that lie ahead for solar power in vehicles. “It’s possible that over the next 5-10 years we could see solar cars driving the roads, and certainly see solar cells provide additional benefits to other electric cars. But for solar cells to have a significant impact as they do on our car, a car needs to be very efficient and lightweight – and a standard consumer vehicle would not have enough surface area to create enough power for it to power the motors.”