Virginia start-up ‘Infinite Invention’ have created a device which potentially allows for the modulation of exported solar PV electricity to suit surrounding grid conditions. The device also provides a quick and simple way of connecting solar PV systems to the grid.

The ‘ConnectDER’ sits at the electricity meter and connects the AC electricity from the PV inverter straight to the grid. It can reduce the costs of PV installations through bypassing all the load-side wiring on premises. This essentially makes PV systems plug-and-play devices.

A more advanced model of the ConnectDER, called the ‘SMART ConnectDER’, allows for integrated metering, remote communication and off-site control. These capabilities open the door to interesting possibilities for alternative solar PV ownership and grid management options. The SMART ConnectDER is able to control the amount of electricity sent to the grid by communicating directly with its accompanying inverter and dictating the amount of electricity to be exported. Any excess electricity is dissipated in the inverter as heat.

The ability to control the amount of solar PV electricity flowing into the grid is particularly useful in neighbourhoods or cities which have a significant amount of rooftop solar installed. It provides a way of controlling the inherent variability of solar PV supply.

Infinite Invention expects to launch the SMART ConnectDER in the US by early 2015. 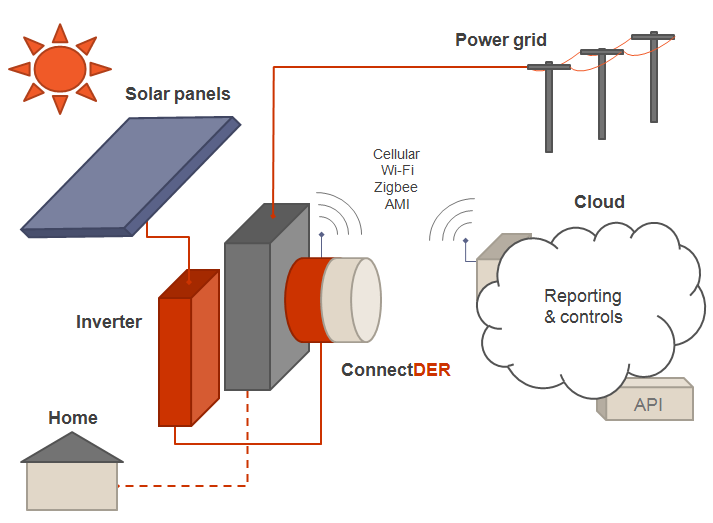 The electricity produced by the PV systems feeds straight to the grid, via the electricity meter. Image Credit: Infinite Invention

There are a number of significant question marks surrounding the implementation of the device, namely who pays for and owns the solar PV system and how the residents will be compensated for their involvement in the project. Currently, the ownership of ConnectDER devices is expected to rest with the network providers as it lies behind the electricity meter. This is a completely new set of opportunities and risks to be digested and capitalised on. It is, however, quite clear that a set-up like the ConnectDER can only succeed with the input of both the consumer and network provider.

There is a ‘tug-o-war’ match currently being played out by PV consumers and network providers, with the winners and solutions to the issues not yet wholly clear. The rising cost of grid electricity combined with more stringent grid connection standards can potentially increase rates of ‘grid defection’ and further widen the gap between solar PV consumers and network providers.

Whitman Fulton, CEO of Infinite Invention, says that the company is looking to bridge this gap, which is also a growing issue in the US.  “We’re actively working with utilities to find ways that they can compensate DER owners for the grid stabilizing capabilities that their PV systems can provide. The whole point of everything we’re doing is to ensure ever greater amounts of solar can be brought to the grid, and that’s going to take work on both sides of the meter.”

I personally believe an ideal scenario would see solar PV consumers and network companies find a way to co-exist and be mutually beneficial. There are ways for electricity network providers to support solar PV development in ways that are also beneficial to their bottom line and long term success.