Terming the development as “game-changing”, Tom Gutierrez, GTAT’s president and CEO, claims the new technology can lower module manufacturing costs by up to 10%.

In typical crystalline silicon solar cells, the front metal contacts – usually made of expensive silver – consist of wide metal lines (called bus-bars) that intersect thinner horizontal lines (called fingers). Individual solar cells are interconnected by stringing them together using copper tabs/ribbons, which are soldered on one end to the bus-bars of one cell and to the rear metallic surface of the next cell on the other end.

Although this tabbing/stringing technology is simple, it necessarily requires the use of wide bus-bars, which are not fundamentally required for a solar cell to function. In fact, they add to the cost of the front metallisation, which is often made of expensive silver. Moreover, getting rid of bus-bars would free up more area on the cell surface that can be used to generate power.

GTAT’s Merlin technology eliminates bus-bars completely by using a flexible mesh in place of wide copper tabs to connect cells. The mesh consists of narrow metal wires that directly contact the fingers of the cell (pictured above and below).

The new design not only provides a robust interconnection with redundant contacts, but also allows for bus-bar free cell designs to be used. Further, as GTAT claims, its technology has reduced the overall cost of silver consumption in standard cell designs by 80% and has reduced the cost of manufacturing by 10% by eliminating tabbing and stringing machinery and replacing it with a cheaper alternative. 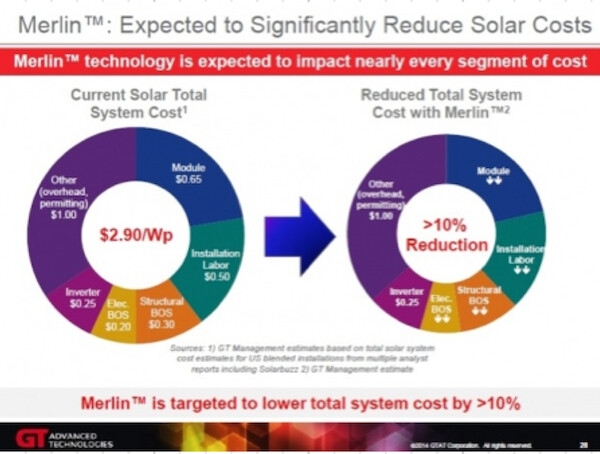 Further, the technology could improve the reliability and safety of solar panels. According to the president of TUV Rheinland, a leading PV safety testing and certification body, the Merlin technology “goes a long way to minimize or eliminate” failure modes commonly associated with soldered tab/ribbon interconnection.

Likewise, the response from module manufacturers has been positive. So much so, that according to Gutierrez, GTAT has had to decline requests from module makers for total exclusivity of the technology. “Everyone that’s seen it wants it now,” he says.

According to the company’s latest press briefing, even if 8% of module manufacturers adopt the technology, potential revenues could be in the range of USD $400 million. However, GTAT will likely see stiff competition from the likes of Meyer Burger and Schmid, who have been developing their own bus-bar free interconnection technologies, Smartwire and Multi-wire respectively. But with buyers already lined up for its technology, GTAT may just have the upper hand.

Although cell technology has advanced significantly in the past decade, bringing higher efficiencies and driving dramatic cost reductions, interconnection technology has seen little change in the last 25 years. If companies like GTAT manage to find large buyers for their technologies, it may finally break the monopoly of the tabbing/stringing technology and open the door for new and cheaper cell designs.