The first instalment of this series outlined the technology developments which have kept screen printed solar cells on top of global PV sales. Despite its dominant position amongst most PV manufacturers, the classic screen printed cell looks set to be replaced by PERC cells within the coming decade. Past that, recent world records set by Panasonic and SunPower on back-contact solar cells point towards architectures which will secure future dominance. This article will explain the basics of metal plating for solar cell fabrication – this is an evolution in solar cell processing which can accommodate cell designs of the future and enable high-efficiency devices at a reduced cost.

The demands of PV manufacturing are continually growing – both the Panasonic and SunPower world record cells require advanced manufacturing techniques which facilitate high‑resolution and low‑force metal contacting schemes. The International Technology Roadmap for PV (ITRPV) predicts the thickness of silicon wafers and use of silver in PV production – primarily contained in screen printing pastes – to decrease significantly over the next decade. This trend can be attributed to the high price of silver and manufacturers cost-cutting through the use of less silicon per wafer. Quite tellingly, the same ITRPV predictions also highlight (nickel and copper) plated solar cells to comprise of over 35% of the PV market by the end of 2024. 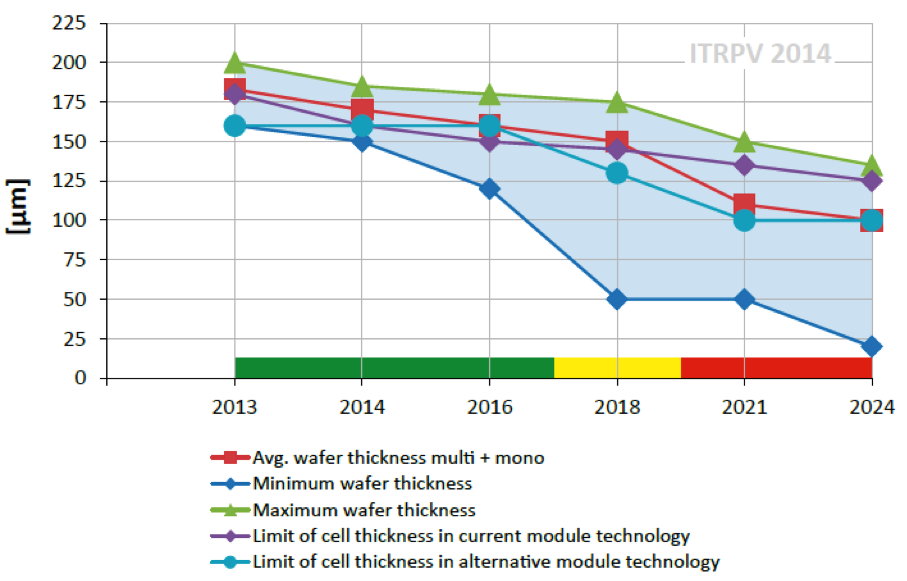 Weight of silver used per cell and the predicted share of plating technologies over the next decade. [Image Source: ITRPV]

An introduction to plating

Electroplating is the process by which a conductive surface can be covered with a layer of metal when immersed in a solution containing dissolved metal ions. In order for dissolved metal to be plated onto the desired conductive regions, they must be ‘reduced’ – in other words they must gain an electron from somewhere in the plating system in order to stick to the conductive surface. These electrons can come from an external power source (e.g. battery or power supply), through the oxidation of other metals within the plating system (i.e. from the oxidation of the copper rod in the image below) or even from reducing agents within the chemical solution (as is the case with electroless plating). 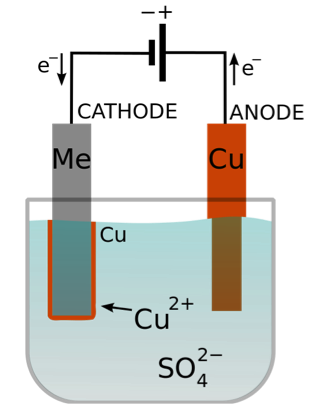 A metal cathode plated with copper (Cu) in a copper sulphate solution (CuSO4) containing a sacrificial copper anode that oxidises and gives up electrons during the plating process. [Image Source: Wikimedia Commons]

Although it may sound quite exotic, metal plating is commonly used to coat and process many consumer goods such as cutlery, car parts, electronics components and even musical instruments.

In the context of solar cells, metal plating can be used as a low-force process which can deposit metal (typically nickel and copper) onto the solar cell at areas of exposed silicon – such as those opened through insulating antireflection coatings. The process does not require any considerable amount of force to be applied and is thus compatible with thinner wafers. Applications include the formation of front and/or rear metal contacts, as well as the reinforcement of less-conductive materials with a thicker layer of plated metal.

One particularly clever adaptation of metal plating for solar cells is the process of light-induced plating. It uses the same fundamental principles as electroplating; however, by illuminating the solar cell whilst immersed in solution, the power supply can be made redundant and the current driving the solar plating reaction comes from the cell itself. This is a plating technique currently being deployed throughout manufacturing lines across the world. 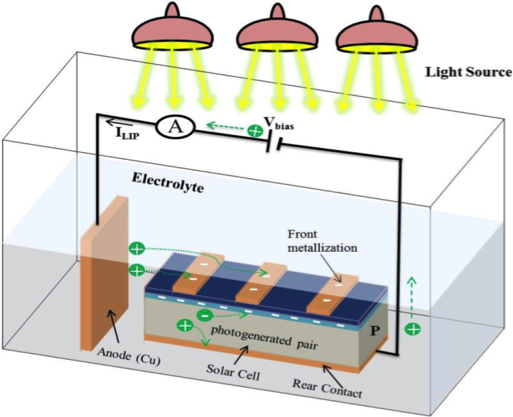 The ITRPV projects the cost of PV be an insane US$0.33 per watt within a decade. In order to get to that point, a transition towards advanced manufacturing techniques will be needed and plating technologies which allow us to use less silver and silicon material whilst improving cell efficiencies will help get us there. It is by no means an easy task to make new processes work in mass production and there are still significant issues to be resolved but the PV research community has a range of options we can sift through on the journey towards super-cheap solar.