Meyer Burger’s innovative ‘SmartWire Connection Technology’ is set for manufacture in Poland, through a partnership with Freevolt and Hanplast, the largest European supplier for IKEA.

The technology, acquired through Day4 Energy, simplifies the necessary process of connecting individual solar cells whilst simultaneously improving electrical performance. Meyer Burger also claims the technology incurs an overall cost saving of US$0.25 per solar cell, primarily attributed to the use of copper as the conducting material as a replacement for silver.

Rather than using millimetre-wide busbars on the front surface of the solar cell, SmartWire forms electrical connections by use of a polymer laminate sheet pre-patterned with a multitude of thin copper wires. These narrow copper wires, which are in the order of tens of micrometres wide, effectively conduct electricity generated by the cell whilst also reducing the shading caused by the metal on the front surface. And less shading means more electricity generation.

In addition, there is an increase of up to 2,000 connection points between the copper wires and the front metal fingers which reduces electrical resistance losses and again improves the electrical performance of the cell. 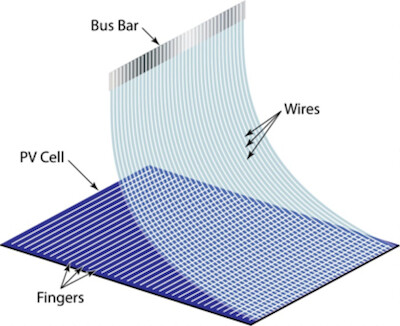 Other advantages of the technology include the low-melting point copper alloy used for the metal wires which makes it compatible with all crystalline silicon technologies currently on the market. By replacing high-temperature soldering with a low-temperature lamination process, the failure modes associated with the incumbent technology are also eliminated.

SmartWire is on the expanding list of up and coming interconnection schemes that are moving away from outdated busbar soldering methods. This technology and others like it seem poised to become more widely accepted as improvements to standard busbar designs and, with their expansion to larger manufacturing plants, are likely to reach Australian shores in the near future.

John Rodriguez
John regularly contributes original technology articles to Solar Choice News. He is a PhD candidate in solar PV engineering at the University of New South Wales (UNSW), having graduated with First Class Honours in a Bachelor of Engineering (UNSW, specialising in PV). His knowledge of and passion for renewables technology led to him receiving the federally-funded Australian Postgraduate Award and Engineering Research Award for research excellence, in addition to being a Co-operative Program scholar during his undergraduate studies. John also works as an energy efficiency and process engineer and analyst.
Latest posts by John Rodriguez (see all)