Putting more renewable energy generation on the ground is one of the Australian Renewable Energy Agency’s core objectives, and one of its first tasks upon its formation in 2012 was taking over the (now defunct) Solar Flagships program, originally created in 2009 to support the development of large-scale solar plants. The 102MW Nyngan & 53MW Broken Hill solar plants and the 56MW Moree Solar Farm are the fruit of their efforts.

More recently, ARENA is aiming to provide funding for 200MW of ‘high merit’ utility-scale solar projects under its Large-Scale Solar Competitive Round. Projects in this sphere are just at the cusp of commercial viability – but may not yet benefit from the broader institutional know-how to be deemed ‘low risk’ from a conventional investment perspective. The funds that ARENA will be providing act as a bridge for such projects to cross over into viability.

But ARENA’s purpose goes beyond simply closing the financing gap; by having a hand in bringing these projects to life, one of its explicit aims to enlighten the efforts of other developers for other projects going forward. Like any good government-backed funding body with a higher purpose, it’s looking to advance the industry as a whole, not just individual players. As such, there is a formalised process for grant recipients to share their experiences with the industry at large; knowledge sharing forums are one of the key ways that ARENA tries to ensure the dissemination of useful information. ARENA also supports knowledge sharing by making lessons learned by ARENA-funded projects available in the ARENA Knowledge Bank (accessible here).

Commercial-in-confidence secrets are one thing, but when the challenges faced by solar project developers are endemic and common to all players, it makes sense to take a collaborative approach on knowledge sharing on projects funded by federal grants. ARENA’s knowledge sharing events aim to foster collaboration in order to arrive at solutions to such common problems. Furthermore, the Agency is in a fantastic position to act as a ‘go between’ for various parts of the broader energy industry in order to smooth over problems that might be invisible or untouchable by other entities. In addition to being a funding body, their knowledge sharing also makes ARENA a bridge builder.

What did we learn? ARENA’s knowledge-sharing workshop for large-scale solar projects

Two projects on ARENA’s shortlist of 22 projects from around the country (Gannawarra & Whitsunday Solar Farms) are being developed by Solar Choice and its development funding partner, Edify Energy. Representatives from Edify Energy and Solar Choice (including the author of this article) were invited to attend ARENA’s knowledge-sharing session for large-scale solar on 22 April 2016. In the room with us were over 50 other people from the companies associated with the projects on ARENA’s shortlist, all gathered to glean as much as they could from talks by representatives of AGL Energy Limited (AGL – developers of the Nyngan/Broken Hill solar plants), Fotowatio Renewable Ventures (FRV – developers of the Moree Solar Farm) and the Clean Energy Finance Corporation (CEFC) – not to mention ARENA’s own bird’s-eye-view insights.

In the morning: Learning from the experiences of others

The morning session consisted of several speakers covering topics from nearly all points of the project development timeline – from the development application and community consultation to construction and right through to commissioning. AGL’s Adam Mackett and FRV’s Tom Best gave in-depth presentations on the lessons learnt at each stage of the process for their respective companies, ARENA’s own Adrian Rule talked specifically about community engagement, and CEFC Division Director Monique Miller talked about clearing hurdles for financing. (The CEFC has a $250 million program to boost the construction of large-scale solar developments in Australia. The program’s finance can be used to complement ARENA’s Large-Scale Solar Competitive Round.)

Some of the session’s key takeaways included:

In the afternoon: A closer look at how to improve knowledge sharing

The afternoon session focused largely on the process of knowledge sharing itself. Everyone in the room was reminded that, should they receive grant funding through ARENA, they will be obliged to ‘give back’ by sharing what they learn as their projects go ahead. The requirements are specific and extensive – taking up about 16 pages of A4 paper. But the Agency’s collection of data goes well beyond the information collected from grant recipients – it also uses data from project applicants to gain insight into current industry trends.

As we learned, these details help ARENA to improve its ‘big picture’ view of what’s happening and to take proactive measures to clear the path for further projects going forward. One of the pamphlets available at the workshop was 7-page synthesis of data from all of the expressions of interest that the Agency received for the Competitive Round, comprising what is undoubtedly the most authoritative look currently available regarding the potential costs & capabilities or large-scale solar projects in Australia. Also available was the most recent of many knowledge sharing reports written by AGL, which share lessons learnt for other developers. 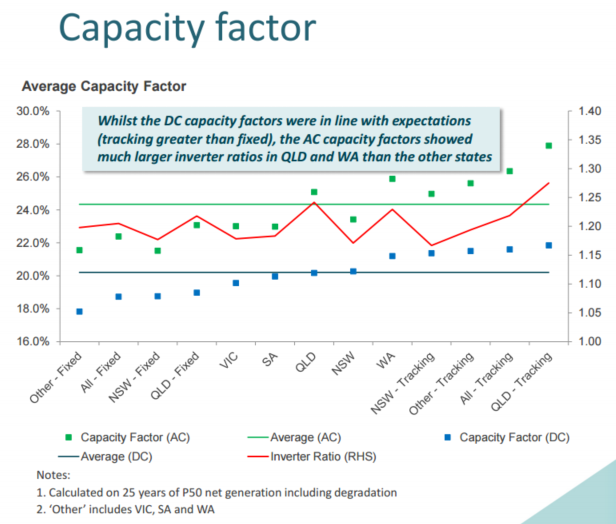 A slide from ARENA’s synthesis of data from expressions of interest for the large-scale solar funding round. The full document can be downloaded on the ARENA website.

The last major part of the afternoon session was a group activity – facilitated by ARENA’s Olivia Boyd – soliciting inputs from the whole room on the range of common challenges facing solar farm developers. The key question ARENA sought to answer through this activity was ‘What are the knowledge sharing priorities for project developers?’

One of the points that was raised repeatedly concerned the differing expectations among project developers and distribution network service providers. Most large-scale energy generators, from coal plants to wind farms, are connected to transmission networks, whose operators have a standardised connection process in place. Only since relatively small-scale solar projects have started coming along, however, have distribution network service providers needed to start considering the matter.

As a result, there are no standard procedures in place across Australia’s states and territories for connecting solar, and the distribution networks – whose main job is to ensure reliable electricity supply to customers – are understandably cautious (often, according to workshop participants, erring on the side of over-caution). Project developers, on the other hand, are effectively at the mercy of the networks (who are natural monopolies) and are required to submit complete project plans and technical specifications in the early stages of the grid connection process – something which can be extremely difficult or impossible without first having approval to connect to the grid.

This catch 22 is the bane of solar farm (and other renewable project) developers throughout Australia, and was in fact the cause for significant delays faced by Moree Solar Farm in securing government funding back when it was still a Solar Flagships project. The fact that project developers are still flagging this as a major hindrance is testament to the fact that not a tremendous amount has changed on this front for large-scale solar project developers since 2012.

By the end of the ARENA knowledge sharing workshop on 22 April, however, there was definitely some hope that there would be a change for the better with regard to this issue – and possibly in time for the winning projects from the Large-Scale Solar Competitive Round to benefit.