South Australian households planning to install rooftop solar and battery storage systems can look forward to the shortest payback period on the NEM, a new report by the Australian Energy Market Operator has found.

In its first ever big study of the impact on the National Electricity Market of new technology like battery storage and electric cars, AEMO has crunched the numbers on the cost to the average Australian household of the shift to integrated solar plus storage systems (IPSS).

According to AEMO’s modelling – which AEMO itself describes as conservative, taken with the view that the battery cost curve will decline at a much slower rate than that predicted by the likes of BNEF – the payback for new IPSS for houses on the NEM averages at around 10 years.

It should be noted, however, that this is for large households. The forecasts include 15 years for medium, and 20-30 years for small houses at the start of the forecast period, predicted to fall to around 4-5 years by the end of the 20 years.

South Australia is estimated to have the shortest payback period at the beginning of the forecast for all three household sizes (small, medium and large), due to a combination of high electricity prices, high solar resource and favourable tariff structure.

South Australian medium and small residential solar + storage customers are also expected to be the first to see a payback period of less than 10 years, in 2017–18 and 2019–20 respectively, according to the report (see graph below). For large households, the payback period is estimated at just under nine years in 2015-16, falling by half over the subsequent 10 years. In Queensland, the payback period for new installations of IPSS for large consumers is estimated to start at around 10 years, and reduce to around 5.5 years in 2024-25. For medium and small QLD customers, payback times are not projected to fall below 10 years until 2019-20 and 2022-23 respectively. 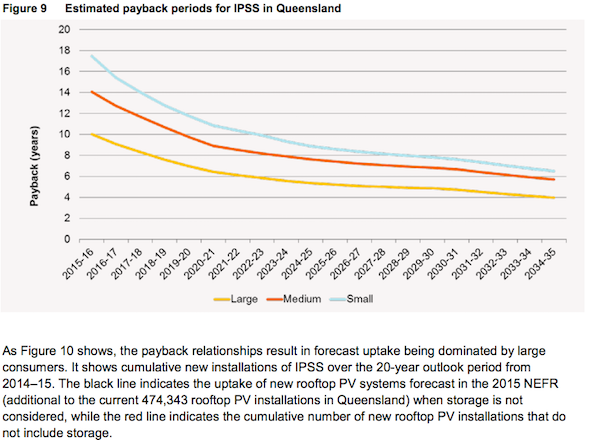 In Victoria, AEMO predicts the payback period for new IPSS will start at around 11 years, and reduce to around six years in 2024-25. For medium and small customers, they are not projected to fall below 10 years until 2020-21 and 2025-26 respectively. 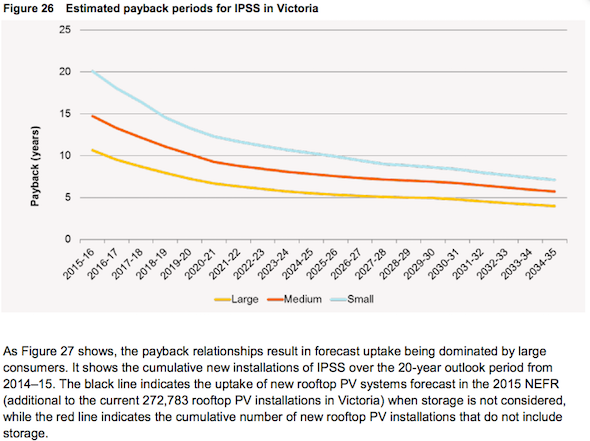 Finally, Tasmania is estimated to have the longest payback period of all the NEM states, due to a poor solar resource. But the percentage of total installed rooftop PV that is integrated with a battery storage system is the third highest of the NEM regions across the forecast period. 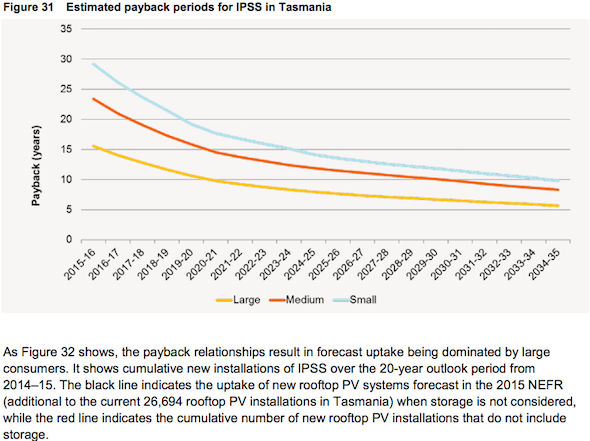 At the beginning of the forecast, the payback period for the smallest customers is forecast at 29 years. For large households, payback is expected to be about 15.6 years, and will drop by half over the subsequent 10 years. Payback periods are not projected to fall below ten years for medium and small customers until 2030-31 and 2034-35, respectively.