New research suggests that the cross-over point between the value of solar and storage and grid prices for Australian households may occur within one year.

That is the conclusion of research from Curtin University’s Jemma Green and Peter Newman, which suggests that the A1 tariff – the standard tariff offered to households by state owned retailer Synergy in West Australia – will become more expensive than the combined value of rooftop solar and battery storage some time in 2017. 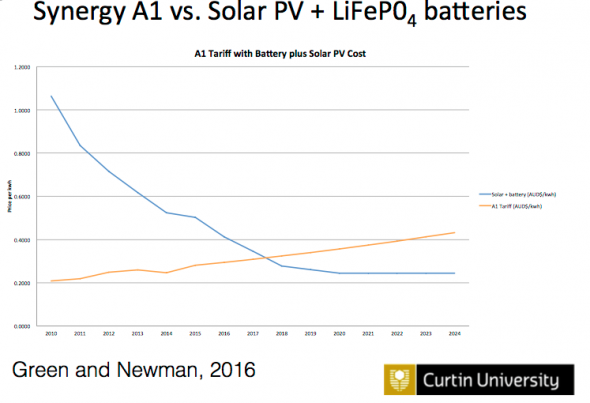 The graph was presented on Tuesday by David Martin – Green’s fellow executive in the solar trading start-up Power Ledger, which is using blockchain technology (the software behind Bitcoin) to trial solar sharing business models in Perth.

“That price crossover – the point where the A1 tariff is equal to the value of energy from solar and tariffs happens next year …  next year,” Martin told the Energy Disruption conference in Sydney co-hosted by RenewEconomy.

He said that did not mean that people were going to “leap off the grid” in big numbers straight away. That’s because when that point is reached there are “intangible benefits” of being connected to the network, and it would cost a lot more to install enough batteries to deal with the consumer’s demand peaks, or days of cloudy weather.

“But as soon as these lines diverge by a significant amount – and overtake the benefits of being connected to the network, then what happens?”

The answer, he pointed out in another graph, is a big problem for the utilities that make their money from supplying power to households, because a lot of that demand will now disappear from view, and go “behind the meter”.

Martin says a home with a 4kW array might still use the grid for most of the time – meaning that only 45 per cent of the load is “hidden” from the network behind the meter.

But with battery storage, the rate of “load defection” – as opposed to grid defection – was likely to increase to the high 90 per cent levels in some instances (see graph above). Those households will only be tapping into network for a small amount of their energy needs.