Solar power could be the key to reducing reliance on fossil fuels into Australia’s future, according to Professor Ken Baldwin of ANU’s Energy Change Institute. Professor Baldwin presented his case for how Australia could transition away from coal and gas without the aid of nuclear power before a conference about nuclear power in Sydney. He argues that if Australia were to double its current solar PV installation rate (about 1 gigawatt for 2012) nuclear would not be needed to ‘fill the gap’ as fossil fuel capacity was taken offline. At this rate, solar power capacity would overtake fossil fuel capacity by 2030, and leave only about 2GW in 2040–down from the current 40GW.

ANU professor Andrew Blakers, director of the school’s Centre for Sustainable Energy Systems, points out that Baldwin’s case rests on the assumption that the installed solar will operate at a capacity factor of 20%, that wind and other renewable energy sources will continue to expand, and that energy demand–which has been dropping for the last few years–levels out. It also assumes that no new coal or gas generation plants are built. 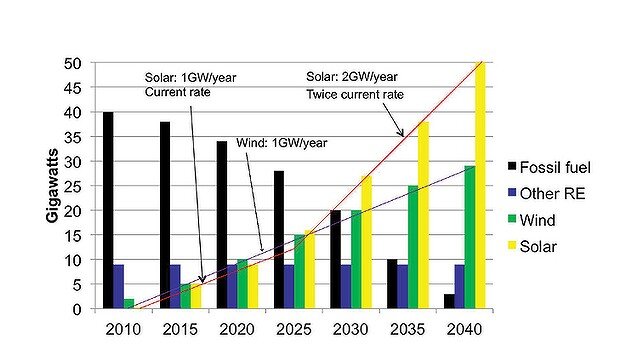 In an article in the Sydney Morning Herald, Professor Blakers notes that parts of Australia are already breaking away from heavy reliance on fossil fuels. Most notably, South Australia currently sources about 30% of its energy needs from renewable sources (mostly wind and solar). But Tasmania also meets a huge portion of its energy requirements with hydro power, and the ACT has a plan to source 90% of its power from renewables by 2020. Other states have also been steadily increasing the share of their power that doesn’t come from fossil fuels.

The solar PV industry–still relatively young and experiencing a fair amount of turbulence as it grows–has been projected by McKinsley to reach an equilibrium by 2015. In the same report, McKinsley predicted that solar power would be cost-competitive with coal and nuclear on a global scale by 2020. This, as well as Professor Blaker and Baldwin’s points attempt to counter the common argument made by proponents of nuclear and fossil fuel generation that solar PV is too costly and unreliable to ever contribute significantly to electricity generation.

A number of studies have been conducted on how Australia might meet its future energy needs using only a mix of renewable energy sources (e.g. AEMO, UNSW, and Beyond Zero Emissions)  All of these studies have concluded that such a mix is possible, although they disagree on the exact composition. As it stands right now, Australia has a legislated renewable energy target of 20% by the year 2020, and about 10% of the country’s power comes from renewable sources.

Thanks to indirect subsidies through the renewable energy target, solar panels have already become affordable and investment-worthy for homes and businesses across the country. The number of Australian homes with solar panels installed now exceeds 1 million, and commercial solar power is likewise seeing rapid growth.