About 2/3 of the respondents in a study conducted by the Australian Photovoltaics Association (APVA) in conjunction with CSIRO expressed support for distributed energy solutions–solar PV panels, solar hot water, battery storage, plus 3 others. The study, which investigated perceptions of and willingness to participate in the distributed energy market, also revealed that most people who have already invested in solar PV or solar hot water have done so in order to save money on power bills, and that the majority are pleased with how their systems are performing. Meanwhile, most of those considering a distributed energy system would prefer to purchase their systems outright as opposed to obtaining financing for them or have them installed under leasing programs.

Distributed energy plays a major part in the energy revolution that is currently underway in Australia; energy efficiency, solar PV, and solar hot water systems are attributed with being some of the main drivers in the trend of falling electricity demand that has been observable in the past 4 years or so. Distributed energy will continue to change the way that households and businesses think about generating and consuming electricity in the years to come, so government and utilities would be wise to heed the message written between the lines of the APVA’s survey results.

Most also felt that their friends would support the technologies. Interest in and willingness to invest in these technologies themselves was also mostly positive (especially for solar PV, solar hot water, and solar PV with batteries), although there was generally slightly less confidence as to whether any of these technologies would be a good match for their individual circumstances.

In the table above, 3.5 is considered to be ‘neutral’ with regard to the statements on the right, where 1 is ‘strongly disagree’ and 5 is ‘strongly agree’. (Click to enlarge. Image via APVA.)

Why did they go solar?

Motivational breakdown of those who have already made the switch

Apart from solar PV and solar hot water, which have proved quite popular in recent years (18% of respondents reported already having the former and 12% the latter), the technologies included in the survey questions are still in their infancy in Australia, and as such no significant statistical data could be collected on them. However, the study did confirm what is an already widely held view about modern-day motivations for going solar: That saving money–not necessarily reducing environmental impact or carbon footprint–is the primary reason that households opt to have a solar system installed, be that solar PV (about 70% or respondents) or solar hot water (about 55%).

Even so, environmental concerns were still the second biggest motivator for PV system owners, followed by the the desire to benefit from government rebates for the technology (which is in essence a financial motivation), and–ranked surprisingly low–the desire to lessen their reliance on electricity retailers (3.7%). Although the main motivation was the same as solar PV, solar hot water system owners had a slightly different motivational breakdown thereafter.

Are they happy with their solar systems? It seems so.

The people who reported owning solar PV or solar hot water systems were mainly happy with their performance to date. About 70% of system owners indicated that they would be interested in investing further, either expanding their existing system, installing a new one, or taking part in a ‘community PV’ scheme, in which individuals collectively invest in a solar system installed on a public or private building and share the returns.

Satisfaction with installed solar PV and solar hot water systems. Again, 3.5 is ‘neutral’, 5 is ‘strongly agree’, and 1 is ‘strongly disagree’ with regard to the statements on the right. (Click to enlarge. Image via APVA.)

If you were to invest in a system, how would you pay for it?

Among those who did not already have a system installed, most indicated that if they were to do so, they would prefer to buy it outright, as opposed to obtain financing or have it installed through a solar leasing scheme. Under such arrangements, a company install the system on a homeowner’s roof for free, and then sell the power that the system generates to the homeowner at a cheaper rate than retail electricity, thus saving them money over the lifetime of the system without incurring any capital costs.

Even though these solar leasing schemes–recently introduced into Australia–have been immensely popular in the UK and the USA, the APVA’s survey results would seem indicate that such schemes have only marginal appeal here, taking a back seat even to more conventional purchase-through-finance deals. This could indicate either that this approach to financing is fundamentally not attractive in the Australian market, or alternatively that the concept remains an unfamiliar and possibly confusing one to the Australian public. 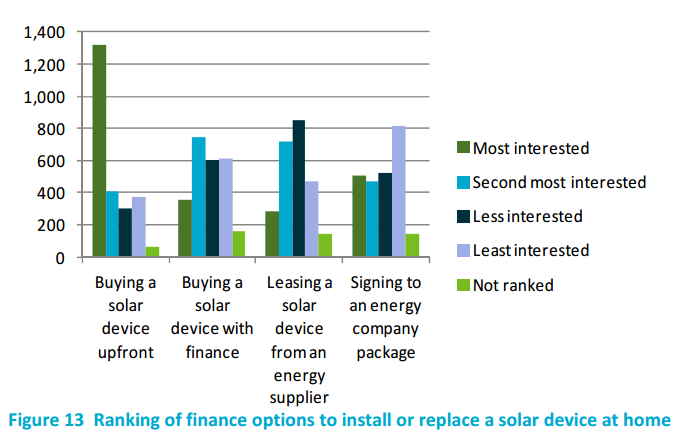 How different financing options fared: Height of bars indicates the number of respondents. Upfront purchase was clearly the option that most people preferred. (Click to enlarge. Image via APVA.)