The ground-breaking around the world flight of solar powered electric airplane Solar Impulse has been completed, with the aircraft touching down in Abu Dhabi after flying more than 42,000km in 17 legs using only the power of the sun.

Swiss pilot André Borschberg landed the plane safely on Tuesday morning and was reunited with his co-pilot on the incredible journey, Bertrand Piccard. 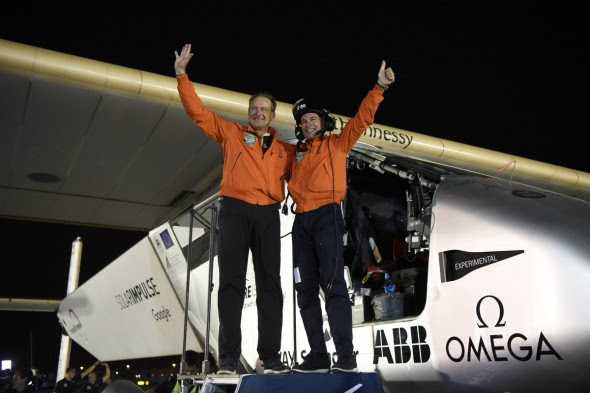 “Taking turns at the controls of Solar Impulse 2 (Si2) … Bertrand Piccard and André Borschberg succeeded in their crazy dream of achieving the first ever Round-The-World Solar Flight,” the Solar Impulse blog said.

“By landing back in Abu Dhabi after a total of 21 days of flight travelled in a 17-leg journey, Si2 has proven that clean technologies can achieve the impossible.”

The 2.3 tonne Solar Impulse plane is powered by 17,248 solar cells and four lithium-ion batteries connected to the electric motors that drive the propellers. It uses the batteries to provide the energy to fly through the night, where it slowly loses altitude. The solar panels provide the power to the electric motors and charge the battery during the day, when the plane regains altitude so it can use less power at night.

The final leg of the journey, from Cairo to Abu Dhabi, took just over two days, but along the way the Solar Impulse pilots clocked up some amazing statistics, including a record-breaking 7,200km, 188 hour non-stop flight across the Pacific from Japan, and a 71-hour transatlantic flight from New York to Seville.

According to the blog, the two Swiss pilots now plan to move on to “new innovative projects, such as the development of solar powered drones,” as part of their continued advocacy for renewables and their role on the International Committee for Clean Technologies.

Just over a week ago Piccard and Borschberg made the stunning prediction that there would be short-haul electric planes for up to 50 people operating within 10 years.