Two significantly large solar farm projects are underway in Western Australia: the Greenough River Solar Farm near Ellendale in the Mid West, and a hybrid solar-diesel plant in the Pilbara region, split into two installations in Nullagine and Marble Bar. The two plants are an impressive statement of Australia’s growing commercial solar power potential in dry, flat, sunny regions where sunshine is an abundant yet underutilised resource.

Horizon Power of Western Australia has partnered with SunPower Corporation Australia and PowerCorp to install the nation’s first utility-scale solar farm, and will feature Australia’s largest solar-tracking system, enabling it to take advantage of whatever sunshine falls on the site. The remote location of the towns necessitates maximum performance efficiency,  including mitigation of the inevitable effects of voltage drop, which occurs when electricity is sent over long distances and is particularly a problem in small-scale electricity generation. The installation, consisting of about 2000 SunPower panels split between two sites in remote WA, has a capacity of 505kW, large enough to provide enough power for 3000 homes, or about 65% of the local daytime energy demand for the two towns. It also uses a SunPower T20 single-axis solar tracking system tilted at 20 degrees and yielding a 30% increase of power production compared to traditional fixed-tilt trackers. A hybrid diesel-solar installation was selected over a pure solar one in order to improve the reliability of electricity supply to the local area, which is too remote to be connected to WA’s electricity grid, centred around Perth. 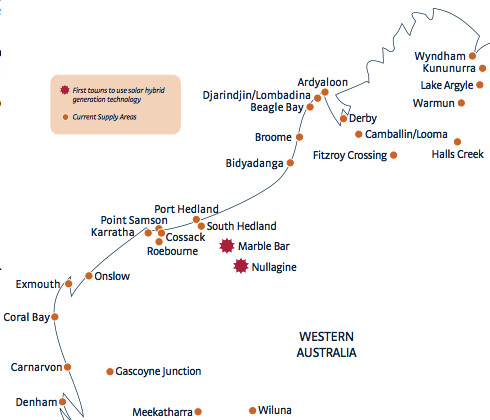 Locations of the Marble Bar and Nullagine solar-diesel generation plants

Another key feature of the plant is its flywheel electricity storage system (see an excellent demonstration video of how the technology works here), which was installed in part to reduce the fluctuations in electricity output–a major problem in remote power generation systems. The flywheels begin to spin as electricity from the solar panels or diesel generator is fed into them through a bi-directional inverter. Once they are ‘wound up’, they continue to spin for a long time, storing kinetic energy which can then be drawn on for power generation, as well as to ensure that the AC output frequency of the plant is constant. 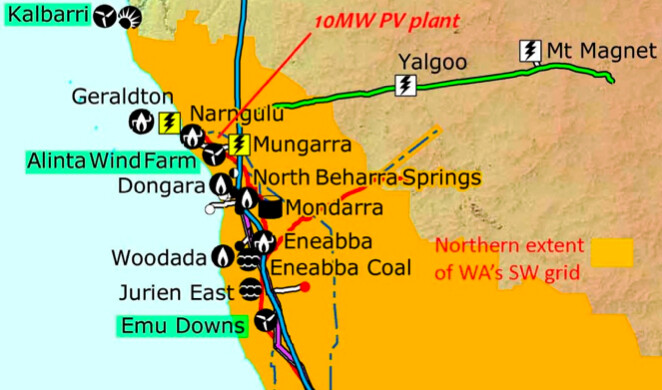 Another massive project underway, this one slightly closer to Perth, is the Greenough River Solar Farm, a 40,000-panel, 10MW PV plant near Ellendale (see map). Construction of the plant, expected to be completed in late 2011, is a joint project between Verve Energy of Perth, who are to be the owners, and BP Solar, who will supply the technology and run the plant. Unlike the isolated farms in Pilbara mentioned above, the Greenough Farm will be grid-connected. The plant will be a major step towards increasing diversification of  WA’s energy supply, which is currently mostly dependent on coal, followed distantly by wind power.

Ecogeneration.com.au article about the farms