The Sunshine Coast, living up to its name, is looking into building one of Australia’s largest solar farms yet. If all goes to the council’s plan, the project will turn 20 hectares of a 50-hectare former sugar cane plantation into a solar photovoltaic (PV) power plant; the other 30ha will be left to native bush regeneration. The Valdora Solar Farm will generate enough power to meet half the council’s electricity needs for the next 30 years, or power 2,500 homes per year.

The Sunshine Coast’s proposed plant, weighing in at over 10 megawatts (MW) is virtually a utility-scale solar plant, and would be one of the largest solar farms in Australia, although not the largest. The largest solar farm currently in operation is Greenough River Solar Farm in Western Australia, at 10MW; Velora would be slightly larger than this. Another proposed plant in Kerang, Victoria, on the border with NSW, once completed, is slated to be even larger, at 30MW. It would also only about half the size of the projects to be developed under the ACT’s large-scale feed-in tariff (20MW), not to mention the federal government’s Solar Flagships program, which though slow in coming along, promises to deliver a solar PV plant of up to 250MW in capacity.

The fact that the Sunshine Coast council is seriously considering this investment is testament to the evolving role that solar PV technology is taking in Australia’s energy generation mix, and is a great example of the motivations driving those who are making the decisions to invest in large-scale solar. This is especially important in Queensland, where public confidence in solar as an investment has taken a beating since the last election; the new government has been assertive in its opposition to schemes supporting renewable energy, withdrawing state support for incentives and programs across the board, calling them ‘redundant’ in light of federal policies in place to further the same goals.

In spite of this, commercial solar power in the sunshine state has still managed to boom to an extent unimaginable just a few years ago, with more and more businesses are investing in solar systems to save money on power bills as electricity prices rise. Queensland prices are expected to rise even further in the 2013/2014 financial year. Meanwhile, the cost of installing a solar system remains historically low across the country–especially for larger systems–further increasing the appeal of investing in solar. The transformational effect that solar system uptake is having on electricity generation and distribution as we know it is also becoming more evident; thanks in part to rooftop solar systems, demand for grid electricity has been falling for 4 years straight.

The Sunshine Coast is aiming to up its green cred

The Sunshine Coast council’s solar aspirations are nevertheless one of the more high-profile cases of solar investment in Australia, especially among cities in the National Electricity Market (NEM), which provides power for all of Australia’s eastern seaboard. It is no mistake that this is one of the most ambitious plans put forward by a local government in the NEM; setting the Sunshine Coast apart as a forward-thinking, green energy hub seems to be part of the reason for the investment.

In a promotional pamphlet (pdf) about the farm by the Sunshine Coast council, mayor Mark Jamieson highlighted the numerous benefits that the project promises to confer to the area. “This project has the potential to transform the Sunshine Coast,” he said. “It would become the embodiment of everything we stand for; a region which is economically, environmentally and socially sustainable. It would save money, reduce our carbon footprint and take us another step closer to becoming the most sustainable region in Australia.” The pamphlet goes on to detail the potential benefits of the plant: $10m of savings over the lifetime of the project, the creation of around 40 jobs directly related to the plant, and a reduction of the council’s carbon emissions from electricity by about 50%. 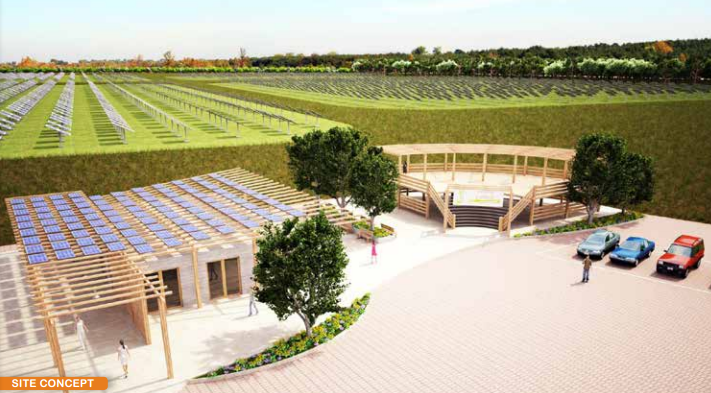