Solar Choice: Many Australian households talk about ‘going off-grid’. Could the Enphase system help them achieve this goal? What are your thoughts on this desire to cut ties with utilities / retailers?

Raghu Belur: Technology exists today for people to go off grid if they wish. There’s solar PV, fossil fuel generators, storage, load management, etc. Is it perfect? Completely streamlined? Easy to install? Probably not – that’s what Enphase is working on. The fact is that a lot of people are already off-grid today.

The question is: Is the motivation to go off grid economical or is it emotional? I think a lot of it is purely emotional because the economics are difficult. The grid has fantastic quality – they’ve done a great job in ensuring that if you flip your light switch on, the light comes on. If you want to go off grid and still have that same quality of service, you may have to invest very heavily.

Having said that, we don’t believe that grid defection is a good idea. We believe that there is a lot of benefit to be had in remaining connected to the grid. We all may have to play a role in supporting the grid, which is what smart distributed resources (e.g. solar and storage do). You can cooperate with your neighbour and your substation to provide the resiliency needed. Yes, there’s more technological development needed, but I’m ready to take on that challenge rather than suggest that people get off the grid – it would just be too expensive to meet the same quality of service. 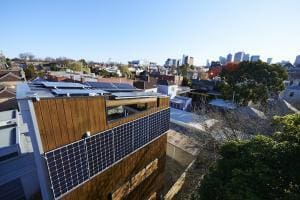 Being connected with solar plus storage gives you a choice about where you get your energy from. While it may not be an issue of grid defection, you may still be able to be energy self-sufficient with solar and storage something like 90% of the time. For example if it’s been really bad weather for the past few weeks, it’s the middle of the night and your storage is depleted you may want to be able to draw from the grid. So there is this middle ground where I may be “off grid” most of the time but I’m still connected.

And by the way, all of this decision making has to be abstracted away from the system owner, because they’re not going to be looking at real-time pricing and making choices.

Julia Pfeiffer: I think we need to break that false connection that people make between ‘utility’ and ‘network’ – because yes, at the moment utilities manage the network but the network itself has amazing benefits. Consumers must start to make the distinction between utilities and the grid, and understand that if the goal is to reduce carbon emissions and reduce their power bill, a scenario where you stay connected to the grid but only use grid supplied power as backup, is ideal.

RB: I honestly believe that the success of our industry is not at the expense of the networks or for that matter the utilities. They’ve done a good job during the hundred something years that they’ve been in business and they’re smart people. You see their evolution actively happening – in many places they’re participating actively in the solar industry. They recognise that this is the new world – the way it’s going to be.

Part 1: The evolving role of the solar home on the electricity grid

Part 2: Home solar in Australia: To grid or not to grid?

Part 3: Why Australia is fertile ground for home battery storage