I had the opportunity to catch up with Enphase Energy co-founder Raghu Belur at Australian Utility Week following a panel discussion about distributed renewable energy integration in which he took part.

The panel conversation focused heavily on forward-thinking approaches to the utility-customer relationship as enabled by distributed generation communication, control and generation technologies – both hardware and software. During the talk, Mr Belur noted that the imminent transformation of the utility industry at hand is not just about solar – but about energy.

Utilities are key stakeholders in the revolution, and they “have incredible amounts of intelligence” but don’t necessarily have the right systems to leverage that intelligence. Mr Belur believes that, coupled with this data, intelligent distributed technologies such as their microinverters and modular AC batteries have the potential to “increase the efficiency and resiliency of the grid”.

Enphase is one company helping utilities to do just that. Mr Belur cited the example of Hawaii, where distributed solar systems using Enphase microinverters (some 800,000 of them spread across 51,000 homes) collectively constitute the second largest generator in the island state. When problems emerged as a result of the high penetration of solar on the grid, the utility was able to make the unprecedented move of asking Enphase to remotely adjust the operating conditions in all of their distributed microinverters – thus averting the huge expenditure of the utility, who would have otherwise had to make 51,000 house calls to manually adjust settings.

Solar Choice (James Martin): In Australia there’s a perception of Enphase’s microinverters as being a ‘premium’ product with some ‘nice to have’ functions (e.g. individual panel monitoring, etc), but that they are mainly a solution for homes facing special circumstances (e.g. on shaded or multi-angled roofs). Generally speaking, people are not aware that the range of functions built into Enphase’s microinverter systems is actually much broader.

In the talk, you mentioned the potential for intelligent systems to integrate in with utilities, but customers will not yet see any direct benefits from these more advanced, higher-level features, which will only be possible with greater utility integration. This could be years off.

What’s the case for installing an Enphase Microinverter System in Australia right now?

Raghu Belur: I think we have to look at the lifetime cost of the system, even just in an economic sense. Looking at what happened in the States, at first people said, ‘Oh, yeah it’s a microinverter – it’s good for shaded roofs’. Of course that’s true but it’s also good for traditional non-shaded installations – Enphase is now the dominant player in the residential solar space in the US, with about 33% market share. The vast, vast majority of our installations in the US are not shaded: they are traditional systems. This is happening more and more every year. This is because people are recognising that it’s performance, quality, right-sizing, future-proofing all in one. All of these things are a very big deal.

I’ll give you an example. You’re investing today in a 20-year asset; not a smart phone that you’re going to replace in three years. It’s very unrealistic to expect that the system will operate in the exact same way for the next 20 years. That’s not going to happen. Look at how dramatically different grid conditions are, tariff conditions are, weather conditions are – all of those things are changing. You want to install a system that adapts over time. 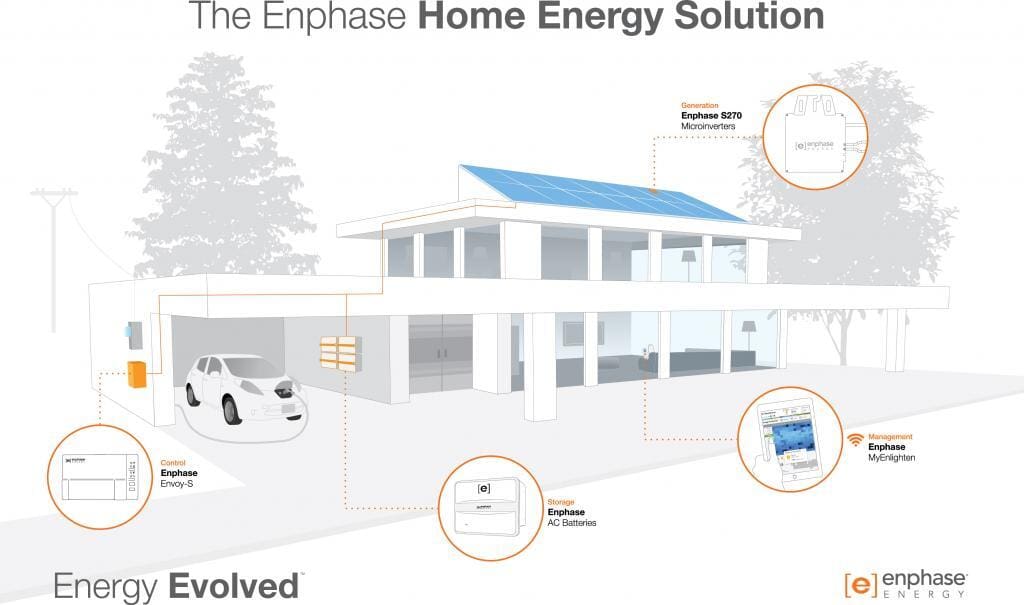 So when you think about cost, you need to think total cost – greater energy harvest, reliability, future-proofing, up-front installation cost, fire safety. I think dollars-per-watt is a very narrow view in the decision-making process. That’s what we’re spending a lot of time educating our partners about. You’re selling a 20-year bond that pays annuities over 20 years and you want to make sure that you’re indeed still generating that annuity five years from now.

Our costs have been coming down significantly, to soon become competitive with many string inverter systems – not to mention the fact that installers save on labour costs thanks to the easier installation and shorter installation times. Enphase’s Australian market share (by shipment) has grown from 2% to almost 10% between 2013 and 2015. This is by virtue of the fundamental benefits of Enphase’s platform: modularity, expandability, and the ability to monitor individual units – not to mention a 10-year warranty on the inverters.

If someone installs a rooftop solar system with Enphase right now, they’re getting all of the benefits without paying significantly more for their system. We want to dispel the perception – as we have in the US – that Enphase is a premium product for which more money should be forked out. We don’t see these extra functionalities as luxury add-ons, we see them as essential technology that should be widely accessible.

Taking a slightly longer-term view, we anticipate that an increasing number of Australian households will install Enphase systems based on their immediate value. Further down the track, as their utilities evolve, these homes will already be well-positioned to take advantage of the other, higher-level benefits that will become possible, allowing them to transcend being mere electricity consumers (with ‘dumb’ solar systems serving as little more than ‘barnacles on the grid’) to become more interactive participants on the market. Emerging models such as peer-to-peer power and storage are the sorts of opportunities that will be available to households with intelligent energy technology.

Part 1: The evolving role of the solar home on the electricity grid

Part 2: Home solar in Australia: To grid or not to grid?

Part 3: Why Australia is fertile ground for home battery storage