NSW’s regulator IPART has released its draft report for its recommendations for the state’s benchmark solar feed-in tariff range, to come into effect from 1 July 2018. The recommended ‘flat’ or ‘anytime’ feed-in rate will drop significantly from the current 11-15c/kWh down to 7.5c/kWh.

Meanwhile, loosely following suit with Victoria, IPART has also made recommendations for time-varying rates, where the value of solar energy exported to the grid will change depending on the time of day. Interestingly (and weirdly to some), the highest rates will be applicable when virtually all solar PV systems have either ‘gone to sleep’ for the evening or are metaphorically getting ready for bed, during the waning sunlight hours. 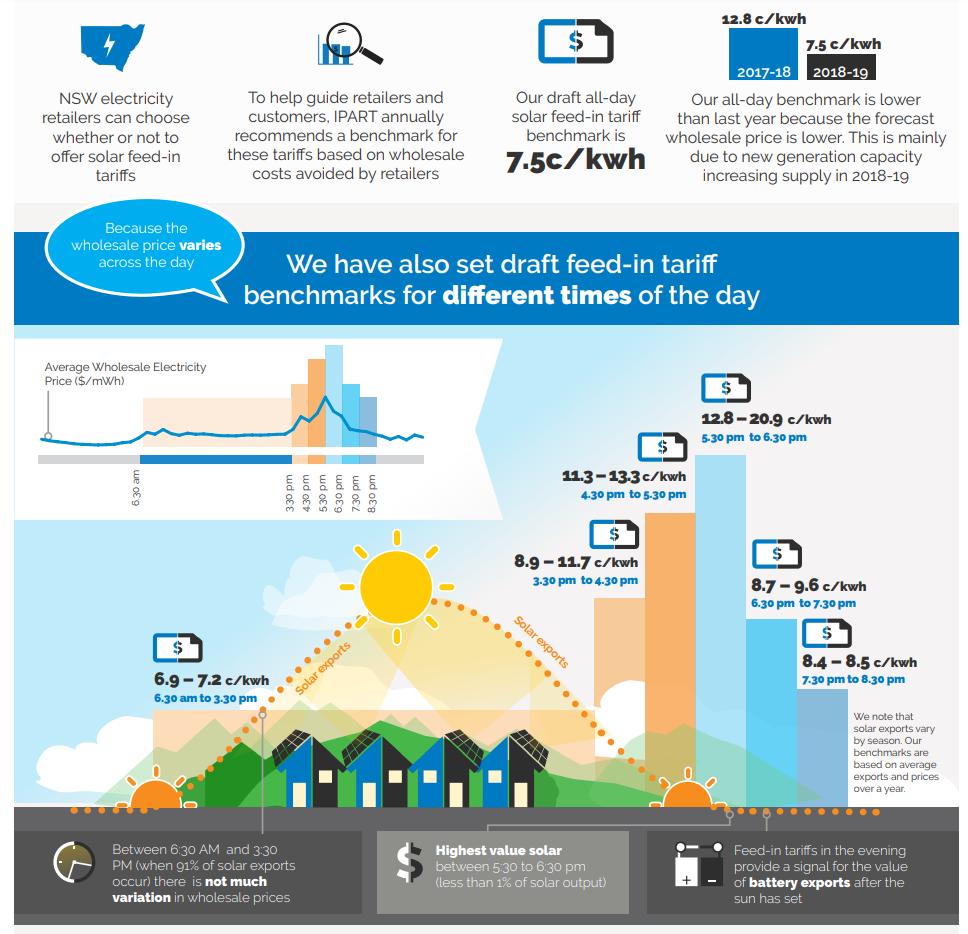 Infographic about IPART’s recommended solar feed-in tariff rates for 2018-2019, including the time-varying rates. (Click to enlarge.)

There is some logic to the apparent madness, however – the rates are based on average wholesale spot market prices for NSW on the National Electricity Market. Wholesale prices tend to spike in the late afternoon, when people come home from work in school. They spike just around dinner time (between 5:30 and 7:30pm), when households tend to use the most electricity. The reasoning is that exported solar (and stored battery) energy is worth more to to the state’s electricity infrastructure in general when sent into the grid during those times – fetching system owners up to a (recommended) rate of about 13-21c/kWh. For most of the solar energy-producing parts of the day, however, the recommended rate is about 7c/kWh, and this is the rate they will receive the vast majority of the time.

Average wholesale electricity prices by time of day in NSW.

That hasn’t stopped solar advocacy stalwarts Solar Citizens from planning an action to ‘Keep Solar FiT‘ in the Sydney CBD for 15 May – the last day of public hearings on the draft recommendations. 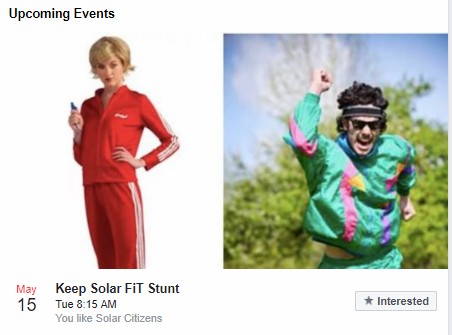 Reminder: The new rates are not mandatory (nor were the old ones)

In the end, most solar households will end up getting rates that fall within the recommended range (especially if they’re savvy enough to shop around).

Is this bad news for solar system owners?

It is definitely not good news that IPART is recommending such a dramatic reduction in the feed-in rate. Virtually every solar system owner in the state (including myself) has become used to receiving a reasonable feed-in tariff this year thanks to IPART’s recommended benchmark rate of 11.6 – 14.6c/kWh – but that looks set to end. The drop in recommended rates could significantly impact the savings that rooftop solar affords NSW households & small businesses.

But the reduction by no means will result in catastrophe for solar system owners or the state’s solar industry. The recommended benchmark solar feed-in rate for 2016-2017 was only about 6-8c/kWh, and a typical 5kW solar system was about 20% more expensive then than it is now. So even though solar system prices were higher on average back then, households still though that solar was worth a go with the lower feed-in rates.

And in fact, the plethora of electricity retailers offering different feed-in tariff (and electricity rates) in NSW should mean that ordinary solar system owners (who don’t have batteries) will end up getting a reasonable feed-in tariff rate (again, provided that they shop around a bit).

In a worst case scenario, a standard household using 25kWh of electricity per day with a 5kW solar system on the roof (using about 30% of that energy directly) could see their annual solar savings fall by about $200 if their 12c/kWh rate drops to 8c/kWh, according to our initial estimates. Even still, a solar system will still save the home in question around $800 per year – or possibly more if they manage to up their ‘self-consumption rate – see below. (You can play with the numbers yourself with our Solar Payback Estimator.)

$200 isn’t exactly small chips for households counting their pennies and with high expectations of their solar system, but it’s also not the end of the world if you think of the higher 2017-2018 feed-in tariffs as rates from a ‘bumper crop’ year.

Regardless of any reduction solar feed-in rates, the most important way that solar system owners will get value from their system is to use the energy directly themselves, thus reducing the amount of energy they need to purchase from their retailer. Read more about solar self-consumption here.

One of he reasons that IPART is recommending lower feed-in rates is that a lot of new electricity generation capacity has come online in the state in the last year – driving down the wholesale price of electricity thanks to the laws of supply and demand. Whether this will translate into lower electricity prices for households remains to be seen. In any case, the wholesale price of energy is only one part of many components that make up the retail price – so if there are any changes, they are unlikely to be as dramatic as the 50% drop that feed-in tariffs look like they’re about to undergo. 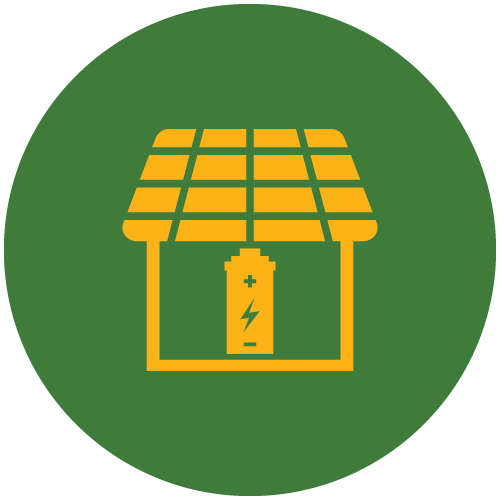 Perhaps the most interesting implication of IPART’s recommendations is what they could mean for the battery storage market in the state. This is so for two reasons:

1. Battery storage is more attractive when feed-in tariffs are low

Many households are already very interested in the prospect of storing their solar energy for nighttime use (and higher rates of self-consumption), but a higher feed-in tariff actually works as a disincentive for getting battery storage – why pay for batteries to store the energy when you get an easy (if not massive) feed-in credit by letting it slip into the grid? A lower rate increases the attractiveness of batteries – especially when grid electricity prices remain high (currently at about 25c/kWh around the state).

2. The time-variable rates could be good for battery owners

Provided they have technology (such as Reposit) that allows them to release their stored energy into the grid when rates are high, battery system owners could benefit from the new, time-variable feed-in rates. The logistics and economics of this are a bit complicated, but with the current recommendations, IPART appears to be helping to unlock the broader potential of distributed solar and storage by introducing an incentive to export during specific times of day.

As mentioned above, solar has made plenty of sense for NSW’s solar households even when system prices were higher and feed-in tariffs were lower. This fundamental fact isn’t going to change with the alterations to the recommended feed-in tariffs. That being said, those considering solar should ensure that they’re doing everything possible to make the most of their solar energy. One of the best ways to do this is to shop around for an electricity retailer offering the best rates possible (keeping in mind that a high feed-in tariff doesn’t always mean better savings).